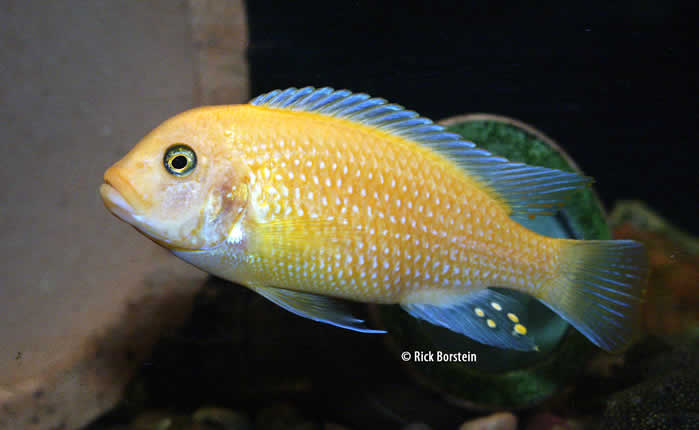 Metriaclima estherae (aka Pseudotropheus esteherae and Maylandia estherae) is a robust Malawian mouthbrooder first typed by Ad Konings in 1995, although it had been exported since the 1970's. Konings has shown that this fish is different enough from the popular Pseudotropheus zebra types to merit it's own genus.

Metriaclima estherae is found over rocky areas in the lake near reef structures.

You should have little trouble caring for this cichlid. Maylandia estherae is hardy and easy to keep. Provide regular, partial water changes, a temperature of 76-80F and moderately hard water.

This fish is moderately aggressive. I kept mine with some more aggressive Malawians with no trouble. I have not observed aggession or mate killing.

Males of the species get up to about 4.5". Females attain a maximum size of 4" or so.

Metriaclima estherae will eagerly consume a variety of prepared foods. I fed Tetra Cichlid Flakes, Aquadine Duraflakes, Tetra Cichlid Sticks, spirulina flakes and earthworm flakes. They are omnivorous, so a good mix of fish-based and vegetable-based food is a good idea.

I obtained six young fry from Scott Moreen of the GCCA. The "red" morph was the type he was seeking for some time and was finally able to obtain. Scott is quite a discerning hobbyist so it was no surprise to me that these fish turned out to be something special. I think you'll agree from the photo above.

Folks who know me understand that I'm usually first in line to try just about any yellow or orange-colored cichlid, so I was prepared to bid high in when Scott brought in fry to the BAP auction.

To breed the fish, condition them on a variety of foods by feeding twice a day. Provide a flat stone or piece of slate for the "act". That's about it.

Brood sizes are similar to many other Pseudotropheus species; about 20-30 eggs.

Females are good holders, although for production I generally strip females at a couple days post-spawning and artificially raise the eggs.

This fish occasionally is inihibited from spawning by more aggressive tank mates. If your fish aren't "getting busy", remove the agressive fish from the tank. Some peace and quiet generally gets them in the mood.

I have not seen this fish in local pet stores. My guess is that young adults would go for $12-18.

Metriaclima estherae "red" is something of a hobbyist's fish at the moment and it has not yet become highly popular outside of "cichlidiot" circles. As of this writing, there are a few GCCA members who have the fish. Several wholesalers list this fish, but not often the "red" variety. Ask your pet shop to order some for you . . . you will enjoy this fish.