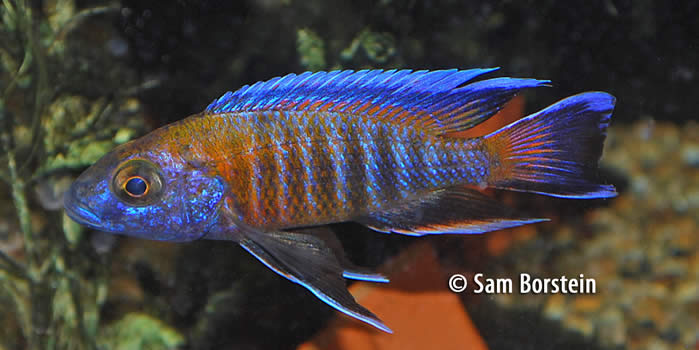 Aulonocara jacobfreibergi is one of the largest of the cichlids generically called peacocks. Not large as far as cichlids go, but males can attain a size up to 8 or 9 inches, females somewhat smaller. Not surprisingly, it is also one of the most popular. Originally called Trematocranus jacobfreibergi or the Malawi Butterfly, it was one of the first peacocks brought into this country in the early seventies. There are several populations available today all grouped under the name Aulonocara jacobfreibergi. The most common are the "Otter Point" and the "Lemon Jake". Others include the "Hongi Island" and the "Cape Kaiser". Recently some albino A. jacobfreibergi varieties have surfaced.

The male "Otter Point" shown as "Fish of the Month" won Best of Show at the 1998 Cichlid Classic in Chicago. It is owned by Ron Georgeone of Ohio.

The common name for this fish is The Malawi Butterfly Cichlid

A. jacobfreibergi is present in different populations in both the northern and southern parts of Lake Malawi. They are found in both sandy and rocky parts of the lake. The males like to occupy caves and will fight off all invaders into their territory.

A. jacobfreibergi likes hard alkaline water around 76-82 degrees, although they will tolerate slightly higher or lower temperatures. Some salt may be added but they do fine without. As stated, A. jacobfreibergi likes a sandy to rocky habitat and caves should be included. Minimum tank size for a pair is 20 gallons.

A. jacobfreibergi fry are relatively large and can eat anything. Start them out with newly hatched brine shrimp. If you prefer you can start them out with infusoria and/or microworms. Adults will readily eat flake food, pellet food, adult brine shrimp, bloodworms and earthworms. In the wild they eat insect larvae and crustaceans.

A. jacobfreibergi are typical Lake Malawi cichlids. Wild fish do best when one male is in a tank with 4-6 females. I recommend a minimum tank size of 55 gallons, a 75 gallon even better. If you raise young to get a breeding colony, sometimes a second male in the tank will be fine. Caution must be used if you use two males. One, you should always use the best male for breeding and with two males in the tank you can never be sure who is fathering the young*. Secondly, two males living harmoniously together one day makes a great battle the next. Keeping a second male in another tank is probably best. Then you have a spare to step in when needed.

* I have witnessed a female going back and forth between two males and spawning with both.

If you plan on obtaining A. jacobfreibergi fry know what you are purchasing, the price can vary greatly. When purchasing fry, if at all possible, see the parents first. If not, buy from a reputable dealer. When buying "wild caught" be careful that the right females are available for the males. Also pay strict attention that the parents are representative of wild fish. For example, inbreeding can cause changes in coloration. I have seen plenty of "Sunshine Peacocks" that were predominantly blue not yellow.