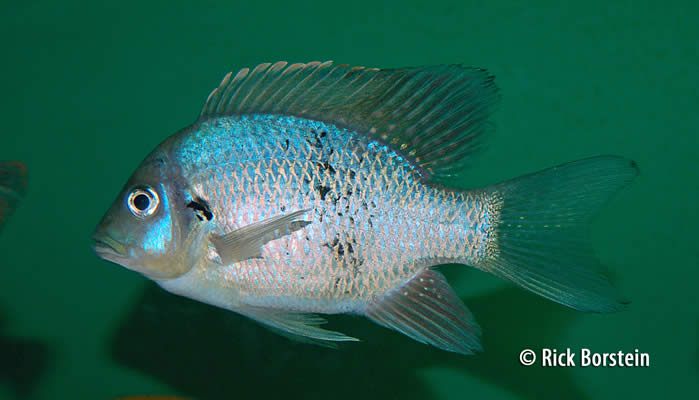 Ptychochromis sp. "Northern Red Fin" is a substrate spawning cichlid native to the island of Madagascar. A recent import (after 2000 I believe), it is currently undescribed and there is a dearth of information on this fish. There are virtually no references on the internet nor in the "bible" of Malagasy cichlids, The Endemic Cichlids of Madagascar. The genus Ptychochromis was first erected by Steindachner in 1880.

From an evolutionary standpoint, the cichlids of Madagascar are primitive. The Malagasy landmass split off from Africa about 120 million years ago. Isolated from the rest of the world, Madagascar developed a great number of fish that are found nowhere else.

Human pressures such as deforestation and agriculture have taken a huge toll on the native cichlids. Many are extinct or threatened. It isn't exaggeration to say that most all of the native cichlids of the Madagascar are in trouble.

Ptychochromis species are found in river drainages in Madagascar.

Care should be given to choosing tankmates for Ptychochromis sp. "Northern Red Fin" since this is not an aggressive species. These fish should not be kept with aggressive, Central American cichlids.

Compared to other cichlids, Ptychochromis sp. "Northern Red Fin" seem to have little idea how to defend themselves. When threatened, they simply show their side to the aggressor fish. This aggressive display might play in Madagascar, but it is ignored by New World (and other Old Word) cichlids which will deliver a beatdown. When defending their own territory or fry, they don't seem to take the action quite as far.

If you observe Ptychochromis sp. "Northern Red Fin" for a few months, you will quickly come to the conclusion that they don't behave like a lot of other cichlids. From that perspective alone, they are interesting.

I obtained five juvenile Ptychochromis sp. "Northern Red Fin" from fellow GCCA member Eric Rogne. I believe he had obtained his fish from GCCA member Ric Perez. The juveniles were about 1.5" long. I kept them in a variety of tanks as they grew over the course of the year, eventually placing them in a 90-Gallon tank.

The 90-Gallon tank contained a sand substrate and a variety of rockwork. When the male reach four inches long, the fish spawned inside a terracotta pot. The next day, the eggs were gone.

Almost a year went by before the fish spawned again. Tankmates at this time were a pair of Aulonocara baenschi, six Pungu maclareini and a couple of Buenos Aires tetras. One day, I noticed that all of the tankmates were huddled on the right side of the tank and that a huge amount of sand had been excavated on the left side of the tank. The pair had dug down to the bottom of the tank and laid approximately 300 eggs on a 4" square piece of red clay floor tile.

A quick consultation with my son Sam ensued. Should we pull the eggs?

Given the general poor parental care of the genus, we quickly decided to pull the eggs. Using the method outlined in GCCA's How-To Section, I pulled the hatch and raised them artificially. In the past, I had had poor results using Methylene Blue as an anti-fungal with Malagasy cichlid eggs. This time, I used Acriflavine Plus which worked very well.

After three days in the hatching tank, most of the eggs had dropped off the spawning substrate and had fallen to the bottom of the hatching tank. I used a turkey baster to gently blast off the rest of the babies.

The babies wriggled for quite a long time. In fact, the fry weren't free swimming until almost ten days post-spawn. The fry are tiny and almost black, about the size of Apistogramma fry. Oddly, the fry congregated at the water surface.

The fry are poor hunters, especially compared to New Word cichlids. The BBS would have to be almost directly in front of the baby or it wouldn't find the morsel. I experienced a few losses, mostly due to excessive turbulence in the tank. I moved most of the fry in to a 5-gallon growout tank. They are slow growers. At three weeks, they are just starting to take on the broader shape of their parents.