Aquarium Husbandry (and attempts at pronunciation) of

I can certainly type the name, but damned if I’m sure of its pronunciation.

In the past, I have written a couple of articles on species that I have kept and bred, and for those, I tried to perform as much research as possible so that I can at least pretend to know what I am writing about.  But I have searched high and low for a phonetic spelling of “grammodes” with no luck…and it’s kind of bugging me.  I have asked some of my fish keeping friends about the pronunciation of “that fish” and I have received the following (pardon my own crude phonetic spelling):

I really don't know why I tried this.

Today, while on a particularly boring conference call, I searched on iTunes using the keyword "cichlid" .

Wouldn't you know it, there is an album called Cichlid by the artist A Riley!

I only previewed one of the songs (they're all marked explicit) and its not really my taste.

There is one song called "Kill Myself" which I sometimes feel like doing when I can't get my fish to breed, but that's a story for another day.

Check out this link if you want to hear it for yourself. 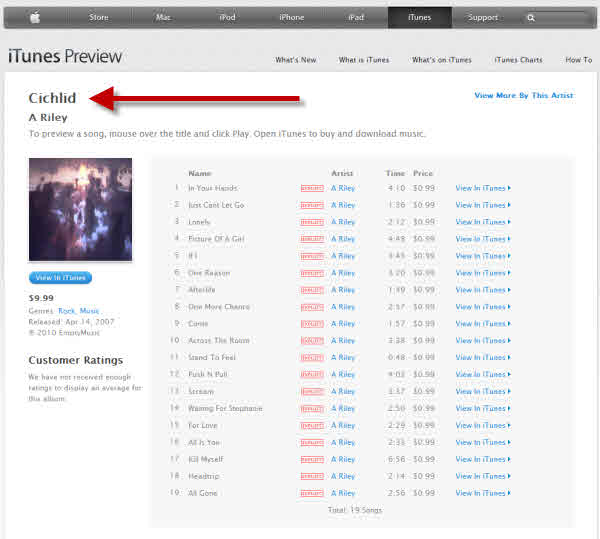 If you've kept fish, no doubt you've also dealt with sick fish. If you have a fishroom full of healthy fish, you need to be careful when bringing in fish from the outside, from pet shops, swap meets and auctions. While quarantining is essential, you also need to be mindful that you don't inadvertently transfer disease from tank to tank when netting fish or changing water.

A few years ago, I visited my good friend Chuck Rambo in San Jose, CA. Chuck took me a large wholesaler in the Bay Area. We first checked out a cart which included a net and a small container of Net Soak. Before using the net in a new tank, you had to dip the net in the Net Soak and shake it out.

Net Soak is usually a solution of Potassium permangenate which is an oxidizer. It helps to prevent the transfer of disease organisms by oxidation. Unlike other oxidizers such as bleach, it is gentle on nets and your hands, and pretty safe to use. Net Soak prevents most bacteria from spreading, but not viruses.