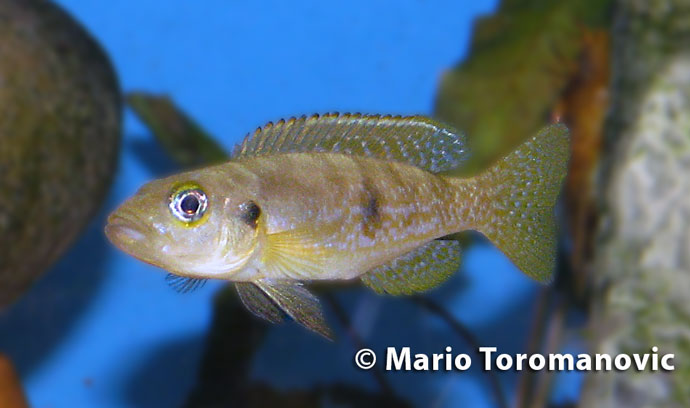 Lepidiolamprologus sp. 'meeli kipili' is found in the sandy zone of the shallow intermediate habitat of lake Tanganyika. It has been observed in the central to southern Tanzanian coast at localities such as Nemansi, Mtosi, Kipili and Kalugunga.

Keeping Lepidiolamprologus sp. 'meeli kipili' does not present many problems. They enjoy digging, and covering their shells, so provide fine gravel or sand substrate. Since they are native to Lake Tanganyika, my Lake Michigan water was a good match. They pretty aggressive towards their conspecifics, so larger tanks are recommended. I kept my group of eight in forty gallon breeder tank with a lots of rock work and many hiding spots. I would add aquarium salt after each 30% weekly water change, so my pH was always around 8.0. I kept the water temperature at 79°F.

I could not find any documentation regarding the diet of Lepidiolamprologus sp. 'meeli kipili' in the wild, but because of their body shape, it is believed that they are hunters, predating on invertebrates and small fish.

My tank raised specimens readily accepted prepared food such as flakes and pellets. They loved frozen food such as daphnia, mysis and brine shrimp, and I enjoy watching them feeding on live black worms, or hunting after baby brine shrimp.

I obtained Lepidiolamprologus sp. 'meeli kipili'at GCCA’s Cichlid Classic silent auction. They were around 1.5 inch long and probably five or six months old. I like buying juvenile or small fish, growing them up, and breeding them, rather than buying breeders or breeding pairs. That way you can study and watch your fish growing, forming pairs and experience the whole breeding process. These fish were from Dave’s Rare Fish, so I was sure that they are quality fish.

I knew that Lepidiolamprologus sp. 'meeli kipili' were shell dwellers, so I placed many different size shells in the tank. The tank was a forty gallon breeder with white sand, a requirement for shell dwellers which like to dig. About six months later, I noticed a pair hanging together and cleaning around a shell. Interestingly, the pair covered all the other shells at their territory with sand, so no other pair would come close and try to claim a shell. Meanwhile, on the other side of the tank, another pair formed, going through the same steps. Other individuals hovered at the safe distance close to the top of the tank. Males from two pairs would launch at them from time to time, but no damage was done.

I witnessed the spawning ritual of one pair (see video below). The colors of both the male and female darken right before and during mating, and the belly and dorsal fins of both fish turned almost black. After spawning, the female constantly guarded the shell, while male stayed a small distance away. About eight days later, I noticed small fry emerging from the shell, about 50-60 in total. At this point I introduced fry to their first food, live baby brine shrimp, which they readily accepted.

Lepidiolamprologus sp. 'meeli kipili' is not a fish you would find at your local pet shop. They are pretty aggressive, they are not very colourful,and so they are kept only by a few dedicated cichlid hobbyists. They are not bred commercially, but juveniles are available from hobbyists in the $8-10 range.