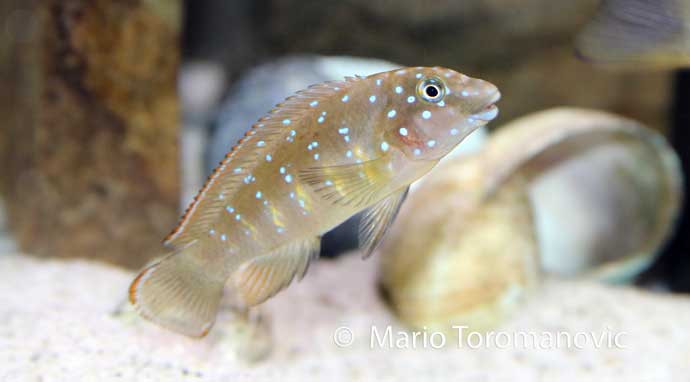 The Eretmodus genus, together with Spathodus and Tanganicodus belongs to goby-like cichlid genera from Lake Tanganyika. Eretmodus cyanostictus, the type species of the genus, was first described by Boulenger in 1898 where it was found in southernmost part of the lake. The northern form has always been exported as E. cyanostictus although it has been known to be distinct from that species for more than two decades. In 1988, Konings pointed to differences between southern and northern species (which he called Eretmodus sp. “cyanostictus north”) and in 2012 Burgess described the northern form as Eretmodus marksmithi. (Source: “Tanganyika Cichlids in their natural habitat” 3rd edition by Ad Konings) Sexes are alike, except that males are bit longer than females. Males get up to about four inches in length. Females are slightly smaller reaching a maximum length of about three to three and one-half inches.

Etymology: eretmo = oar ( Greek ) +odous = tooth ( Greek ) referring to the peculiar shape of the teeth; marksmithi – Mark Smith ardent cichlid fancier and breeder, photographer, and author, who was instrumental in obtaining specimens and photographs of this new species.

Eretmodus marksmithi is found in the rocky zone of the shallow intermediate habitat, of Lake Tanganyika, where it spends most of the time grazing algae from top of the rocks. It’s been observed in the northern to central coast lines in Tanzania and D.R. Congo on localities such as Kigoma, Luagala, Kansombo in Tanzania and Muzimu and Kabimba in D.R. Congo.

Knowing Eretmodus marksmithi was an herbivore. I immediately placed them in a 75 gallon tank with large group of Tropheus moorii "Ilangi". The tank was large enough for the two species and it was furnished with large 3D background, which was excellent place for them to “chill” during the day. The set-up also had many rocks and cichlid caves where the fish were able to hide if needed and thick layer of sand on the bottom. Filtration was provided by two canister filters, which made plenty of water current, mimicking the natural habitat. I conducted 30% bi-weekly water changes, and I would also add aquarium salt, after each water change, so my pH was always around 8.0. The water temperature was at maintained at 79°F.

Eretmodus species live on a diet of filamentous algae which are scraped from the rocks. They are usually found grazing from the upper sides of small rocks (From the book “Tanganyika Cichlids in their natural habitat” 3rd edition by Ad Konings). I fed my fish with strictly plant based foods, by using mix of spirulina and veggie flakes - it worked great.

I obtained eight juvenile Eretmodus marksmithi at ACA convention in Louisville during the famous BABE auction. I knew I overpaid for them, but it was for the good cause and I really wanted them. At the time they were sold as Eretmodus sp. “cyanostictus north” but after some research, it was clear that this was indeed described specie of Eretmodus marksmithi. They were around two inches long and probably five or six months old. I like buying juvenile or small fish, growing them up, and breeding them, rather than buying breeders or breeding pairs. That way you can study and watch your fish growing, forming pairs and experience whole breeding process.

Eretmodus marksmithi are bi-parental moouthbrooders. The pair bond lasts several weeks before and after the fry is born. The female incubates the eggs during the first 12-14 days and then the male takes the offspring into his mouth for a further one to three weeks.

I did not witness my Eretmodus marksmithi spawning, but during the water change I noticed one of the fish holding. Upon closer inspection, it was clear that it was one of the males. I left him for few more days and then stripped the fry. At this point, the fry were fully developed and completely without a yolk sac. I placed them in small rearing tank and started feeding them right away with newly hatched baby brine shrimp and crushed veggie flake.

Eretmodus marksmithi is a rare fish that that is relatively hard to find. They are imported from time to time and if you are lucky to find them through the internet, expect to pay $25 to $30 USD per fish for tank raised fish, and even more for wild caught specimens.