Are you looking to be involved or commited
A Pig and a Chicken are walking down the road. The Chicken says, "Pig, I was thinking we should open a restaurant!". Pig replies, "What would we call it?". The Chicken responds, "How about ham-n-eggs?" The Pig thinks for a moment and says, No thanks. I'd... 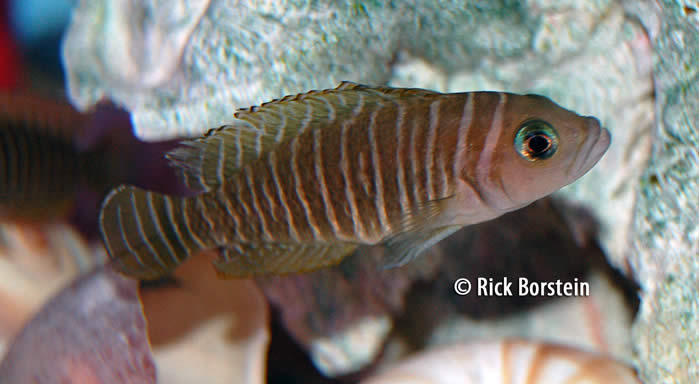 Neolamprologus similis is a shelldwelling, substrate spawning cichlid from Lake Tanganyika first typed by Büscher in 1992.

The term "shelldweller" is accurate since Neolamprologus similis in the wild is found exclusively among in the vacant shells of Neothauma sp. snails. Both in the wild and in the aquarium, these fish dig considerably burying and exposing shells as the needs of the colony grows

Like other shelldwelling cichlids, Neolamprologus similis is a harem spawner. Males court many different females and expend considerable efforts to exclude other males from their territories.

Neolamprologus similis is a found at depths of (Fishbase, ref.) of 27-40M. The substrate is sand and littered with shells. Water conditions in Lake Tanganyika are 74 to 82F with a pH range of 7.4 – 8.4.

Neolamprologus similis is not difficult to keep. Five or six individuals do very nicely in a 15 gallon long tank. Provide a sand substrate and numerous shells. While it is possible to obtain true Neothauma shells imported from Africa, these fish do just as well with moon shells or cats-eye shells which are appropriately sized.

Keep the tank at 78F and provide hard water. Mine did fine in standard Chicago water of pH 7.4 and 300 ppm hardness.

I obtained my group of six juvenile Neolamprologus similis from Pam Chin of Sacramento, CA. Pam is perhaps the foremost breeder and keeper of Tanganyikan cichlids and I was fortunate to be able to visit her fishroom during the July 2007 ACA Convention.

Upon returning to Chicago, I placed the six fish in a 15G long aquarium with a sand substrate. I added about ten "escargot" shells which I bought at a restaurant supply house. In September, I noticed that two of the six fix were a bit larger and more colorful. I surmised that these were the males.

Eventually, the largest "male" pinned the other up in a corner. I added a ZooMed floating log to shelter the sub-dominant individual.

Neolamprologus similis is a secretive fish. Since the eggs are laid in shells, and the parents are very protective, newly free-swimming babies are almost impossible to spot. For this reason, over the next three weeks, I fed baby brine shrimp every day. (I learned that secret from Pam Chin a few years ago!) 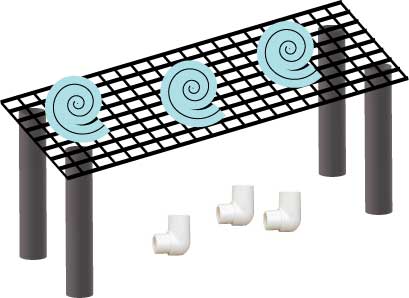 About four weeks after I thought the initial spawning had taken place, I saw some 3/8" long babies. Eventually, I counted nine babies. The "kids" are slow-growing, eventually reaching 1/2"+ at three months of age.

Harvesting shelldweller fry is always a challenge. The best way I've found is to use some PVC pipes and eggcrate material.

Adjust the PVC "legs" so that the eggcrate is about 2 inches below the surface of the water. Place 1/2" PVC elbows on the bottom of the tank. Shelldwellers are very nervous when near the water surface. Eventually, they will move to the PVC elbows. This may take 24 to 48 hours.