7 years 11 months ago #33835 by scubadiver
Replied by scubadiver on topic Altolamprologus compressiceps
I have five of them in a 20 gallon long and have other fish with them and no aggression.

Might be different if you get giant wild ones - if you are growing up young ones should be no problem.

Remembers they grow pretty slow and will be less than 2 to 3.5 inches after two + years of age.
Are you looking to be involved or commited
A Pig and a Chicken are walking down the road. The Chicken says, "Pig, I was thinking we should open a restaurant!". Pig replies, "What would we call it?". The Chicken responds, "How about ham-n-eggs?" The Pig thinks for a moment and says, No thanks. I'd...
The following user(s) said Thank You: Mzielinski311

Less More
7 years 11 months ago #33834 by Mzielinski311
Replied by Mzielinski311 on topic Altolamprologus compressiceps
Rick, you mentioned that you kept four, 2-inch comps together in a 20 gallon tank. Was there any aggression or were they all pretty compatible? I'd like to do something similar and have heard of aggression issues which have made me hesitant. Any comments on your experience keeping them would be appreciated. Thanks 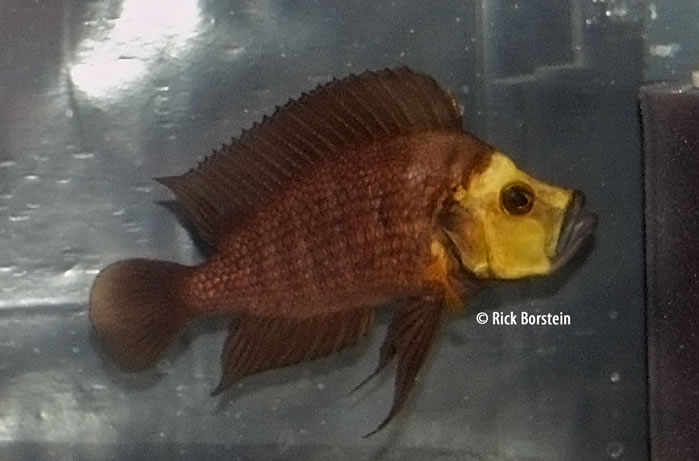 See: over 140 other Cichlid Profiles in our Fish of the Month Archive.

Altolamprologus compressiceps is laterally compressed and will grow to about 6 inches. This fish is not strongly sexually dimorphic. Males grow a bit larger and may have longer finage and deeper bodies than females.

A number of color varieties are available in the hobby:

Altolamprologus compressiceps is interesting in that it posseses very hard scales, perhaps an evolutionary adaption that allows it to move in and out of cracks in the rock without being damaged.

Altolamprologus compressiceps is found in rocky habitats. Distribution is noted in the table above.

Altolamprologus compressiceps is not difficult to handle, but it is a project since it is very slow growing. From hatch to sexual maturity is easily and 18-month to 2-year cycle.

I recommend a species tank and heavy rockwork.

In the wild, Altolamprologus compressiceps feeds mainly on shrimp and other crustaceans which they stalk patiently over the substrate and in the rocks. In the aquarium, they adapt well to a variety of meaty foods such as New Life Spectrum and brine shrimp flakes.

I purchased four, 2-inch individuals at a GCCA Swap Meet. I placed the fish in standard 20-gallon tank with a gravel substrate and extensive rockwork. The fish could be seen excavating regularly, although they spent most of the time hiding in the rocks.

About six months later, the fish started approaching sexual maturity at 2.5 to 3 inches and the largest fish, who I assumed was the male, staked out the "best" territory. Still, no spawning ensued.

At another GCCA Swap Meet, I met a vendor selling "Compressiceps Caves". These small terracotta spawning aids are about 3" wide by 5" tall and look a like a small toaster. Interestingly, in the wild Konings reports that these fish spawn in small holes or shells. Regardless, they seem to want a tight, defendable place to lay their eggs, so I quickly paid for the "toaster" and placed it in my tank.

Within two weeks, the fish spawned and laid about 40 gold-colored eggs in the "toaster". I removed the "toaster" to a 5-gallon hatching tank and the fry were free-swimming about 6 days later. The fry stayed very close the "toaster" only occasionally dashing out to eat the baby brine shrimp I fed them.

At seven weeks old, they are still not quite a half inch long.

Two-inch juveniles are $18–24 each. This fish also often available at GCCA Swap Meets and Auctions.

Altolamprologus compressiceps is a popular fish and can be found at many pet stores that specialize in cichlids. It is commonly available on a number of wholesalers lists, too..