6 years 11 months ago #35012 by Midknight
Replied by Midknight on topic Breeding Altolamprologus calvus
-- I am bumping this thread because I have a similar situation as Matt had way back. I have four Altolamprologus calvus Chaitika. Two are clearly males and two are females. The males are a good three inches long whereas the females are a bit less than two inches long. This makes for quite a difference in overall mass. Compared to the males, the females look like they are a much younger version of the same fish. Bear with me, I do have a question.
-- I read the species profile for A. calvus on this site and it mentioned that the species displays very little intraspecific aggression. I have not found that to be the case. I have kept my calvus in mixed community settings since I got them in April of 2012. They were always very peaceful toward their tankmates, including each other - until recently. They are currently housed in a 50 gallon breeder aquarium with several different species. The males, who are getting rather large now, began finding one another disagreeable. The dominant one decided the other fellow was intolerable and began harassing him relentlessly. I removed the abused male to a tank of his own. He's fine, but seems lonely now (pictured below). 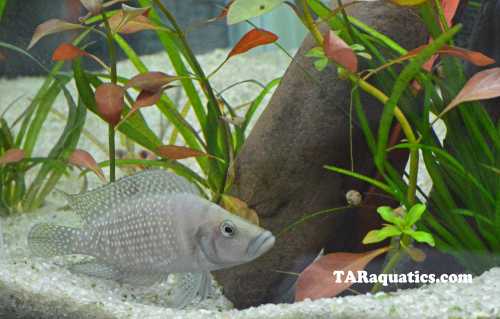 -- In any case, I assumed the fish were ready to spawn so I added some barnacles to the tank for the females to find solace in and for breeding purposes. I now have one female who hovers over a specific opening in one of the barnacles, so I believe she may have eggs.
-- I guess my question is this: Is there some trick to spawning these fish? Is there anything I should watch out for in raising the fry? I appreciate any suggestions.
-- I had a pair several years ago that were quite beautiful and were of similar size to these fish, but instead of getting them to spawn, the male ended up killing the female. He just wouldn't let her rest, constantly chasing her about the forty gallon in which they were housed. I don't want a similar meltdown.
Whatever is true, whatever is noble, whatever is right, whatever is pure, whatever is lovely, whatever is admirable - if anything is excellent or praiseworthy - think about such things. Philippians 4:8

I have removed them from the tank . I relocated her and the shell to a 10 gallon tank . She still guards that shell. But nothing . How long will the fry take to come out ? If there are any

Less More
8 years 5 months ago #32878 by dragonkeeper
Replied by dragonkeeper on topic Breeding Altolamprologus calvus
Chances are pretty good that you have fry. If you are going to try and save them I would isolate them in another tank.
DragonKeeper
~Retired President~

Less More
8 years 5 months ago #32877 by Matt
Breeding Altolamprologus calvus was created by Matt
I have a pair of Altolamprologus calvus supprise me a bit . When I bought the Altolamprologus calvus 6 months ago they were young . I figured I had at least a year before they started breeding . I had a few shells in the tank and noticed the female was in one . The next day I moved her and the shell into another tank. She stands guard outside that shell with her life . Anyone comes near the tank and shes back in the shell . Well its been like that for two weeks and no fry has come out . Or is there fry ? Do I just keep waiting until they come out and how long ?