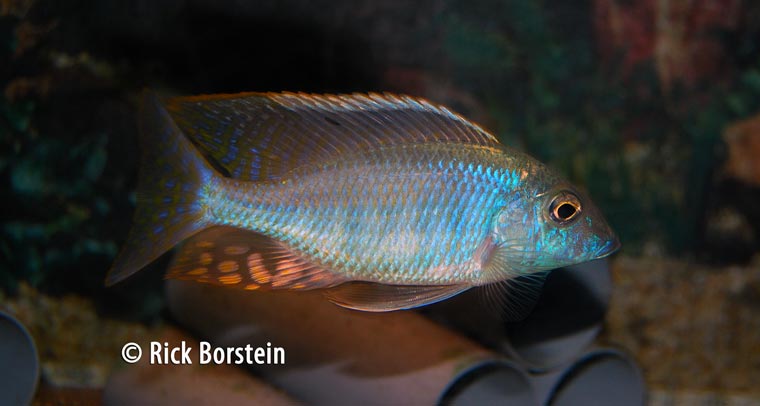 Taeniolethrinops laticeps is a mouthbrooding Malawian cichlid first typed by Trewavas in 1931.

Taeniolethrinops laticeps has sometimes been confused with and imported as Aulonocara rostratum and some texts offer a synonym for this fish as Lethrinops laticeps "Itungi". Regardless, it is a rare fish in the hobby.

Taeniolethrinops laticeps is found over sand at depths of about 20 meters.

Taeniolethrinops laticeps is an easy fish to keep. Because this fish gets big, a minimum four foot tank is recommended. Like other Malawi cichlids, hard water from 76-80F is great and, of course, regular partial water changes are required. For such a large fish, it is not very aggressive. Males will chase females, but seldom is any damage done.

In the wild, Taeniolethrinops laticeps spends the bulk of its time sifting through sand where it ingests midges larvae and other small insects. In the aquarium, it will accept a variety of prepared foods. I fed Tetra Cichlid Flakes, New Life Spectrum, Xtreme, and Dainichi pellets.

I obtained eight one-inch Taeniolethrinops laticeps fry from fellow GCCA member Mike Helford. Mike always seems to have interesting and rare Malawian cichlids and he had brought in wild parents from Old World Aquatics, no doubt at considerable expense. I was immediately drawn to the adults who were colorful to be sure. More interesting to me, though, was the unique head profile of the fish. Mike and I trade a lot of fish and fortunately I was able to take them home.

I first placed the fry in a 40-gallon breeder and about year later moved them into a 110G tank. The 110G was maintained at 78F, had sand substrate, and a few pots for decoration. Within a few months, a large male colored up. I saw brief chasing and courtship activity, but no breeding.

A couple of months later, I saw a holding female! I let the girl hold the eggs for 14 days and stripped her of seven enormous fry at the heads and tails stage. I removed the fry to a 2-gallon brood tank. After about another ten days, the fry were free swimming and immediately able to eat baby brine shrimp and microworms.

Curiously, I have not observed this fish to dig much in my tanks. Konings reports that in the wild that males go to shallow water and build very large bowers.

Taeniolethrinops laticeps is not a fish you will find in a retail pet shop. It's a rare fish. When ordered via specialty providers, expect to pay $50-70 for wild caught adults. Fry, if you could find them, would be in the $8 range.