Placidochromis mliomo is a mouthbrooding cichlid from Lake Malawi, Africa. It is a newer introduction, first typed by Michael K. Oliver in 1989. Mr. Oliver picked milomo for the species name because it means "lips" in one of the native languages of the people who live near the lake. Indeed, the wild-caught specimens shown on Mr. Oliver's website have very prominent lips, indeed! Since this fish is speedy and difficult to catch, it was compared to a fast British aircraft, the Super VC-10.

Placidochromis mliomo is one of the larger Malawian haps. Males approach ten inches in length with females slightly smaller. Females, fry, juvenile males and sub-dominant males all exhibit the strong black and gold barred pattern shown in the picture at left. A group of Placidochromis milomo in a large tank is an impressive sight to see.

Dominant males have blue heads, and some blue spangles on the flanks and on the tail.

Despite their size, this is one of the least aggressive Malawians I have kept of late. My group of eight fish were easily dominated by a single, male Labidochromis sp. "Rhodes Perlmutt" less than one-third their size. I was pleased to breed this fish, but also found that they made superb target fish for some large, aggressive Tilapian cichlids I was having trouble breeding. Placidochromis mliomo is really a fast swimmer, so it could easily get away from the Tilapia. 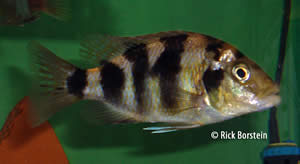 Placidochromis mliomo is found in rocky areas along shorelines at depths of 12 to 90 feet.

This big, fast fish needs plenty of room. I kept eight Placidochromis milomo in a 90 gallon tank that was four feet long. My largest fish was only 7" long and under a year old. Older, larger specimens would benefit from bigger tanks.

I performed regular, partial water changes of 50% of the tank volume and maintained the temperature at 78F.

In the wild, Placidochromis milomo feeds on crustaceans scraped from the rock. As a result of constant foraging, wild individuals develop very prominent, fleshy lips. Aquarium specimens, which don't have to forage for food, have more modest protuberances.

I obtained eight, 3-inch individuals from fellow GCCA member Mike Helford. I immediately placed them in a 90-gallon tank and within about five months the largest male grew to about 7 inches long. Fellow tankmates were a pair of Protomelas marginatus, a pair of Labidochromis sp. "Rhodes Perlmutt" and a breeding pair of Tilapia sp. "Crossriver Cameroon." The milomo were the bottom fish in the aggression hierarchy but, through virtue of their size and speed, were never damaged by any of the other fish.

Weather, sometimes, is the key to breeding success. The day after performing a large water change, an unexpected low pressure cell created a thunderstorm which ripped through the Chicago area. Within 48 hours, all the fish in the tank except the Protomelas had spawned.

I was concerned that the young female wouldn't hold her fry in this aggressive tank, but she was a champ! Twelve days later, I stripped her of twelve, almost free-swimming fry. The fry are extremely large— a bit over 1/2 inch long— almost the size of Frontosa fry! Even better, the fry are really cute and show terrific stripes immediately.

As you'd expect, the fry are immediately able to take baby brine shrimp. Within a week, the fry were eating crushed HBH Graze and growing fast. At four weeks, the fry are about an inch long.

Two-inch juveniles are $15–20 each. This fish also occasionally available at GCCA Swap Meets and Auctions.

Placidochromis mliomo is available in the hobby on numerous wholesale lists. Ask your local pet shop to order some for you if you cannot find it in your area.