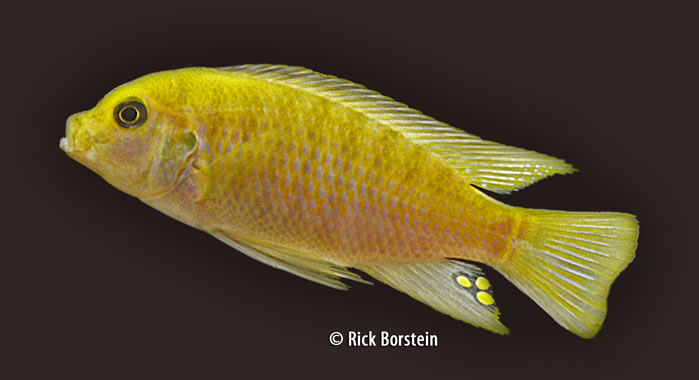 Above A male Pseudotropheus sp. "flameback".Photo and retouching by Rick Borstein.

Metriaclimasp. "flameback"is a mouthbrooding cichlid from Mozambique in Lake Malawi. This fish has not been given an official species name as of this writing. It was first imported in 2003.

Note: We originally published this report using the namePseudotropheussp. "flameback".

Females are very similar to males in appearance, somewhat smaller, and do not show the blue coloration in the dorsal at all or as prominently. Depending on the lighting, the females also have a grayish cast. It can be very difficult to distinguish sub-dominant males from females.

Metriaclimasp. "flameback" is one of the smaller Pseudotropheus and some internet sources call it a dwarf. Males get up to about 3.5". Females are a bit smaller at 3".

Note— do not confuse this fish with Haplochromis sp. "flameback", a totally different fish from Lake Victoria.

Specifics of habitat are not known. Most likely, it inhabit reefs and with significant amounts of rock structures.

Metriaclimasp. "flameback" presents no major problems. It is moderately aggressive, so only keep it with other similarly disposed fish.

I obtained ten juvenile fish from fellow GCCA member Mike Garibaldi. I housed them in a ten gallon tank until 1.5" long then moved them into a 40 breeder. When the fish reached 3" in length, I moved them to a 65-gallon breeding tank.

During this time, I did 50% weekly water changes on the tanks.

At just under 11 months in age, my fish bred for the first time. My excitement was short-lived as the female dropped the eggs after three days. Three months went buy before my next spawn. We experienced a low-pressure cell and massive thunderstorms in the Chicago area in May 2004, and many fish in my fishroom started breeding. The male Pseudotropheus sp. "flameback" spawned with two different females within a couple of days.

Fearing that the females wouldn't hold to term, I waited anxiously for 11 days. At this point, I netted out the two females and stripped them of about a dozen eggs (heads and tails stage) each. I placed the eggs into a commercial egg tumbler, and at 20 days post-spawn, they were free-swimming.

I place the free-swimming fry in a 5-gallon grow-out tank furnished with a sponge filter and sand bottom. I fed teh fry freshly hatched baby brine shrimp for the first ten days and gradually transitioned them to cichlid flake.

The fry achieved between 1/2 and 3/4" in length after five weeks.