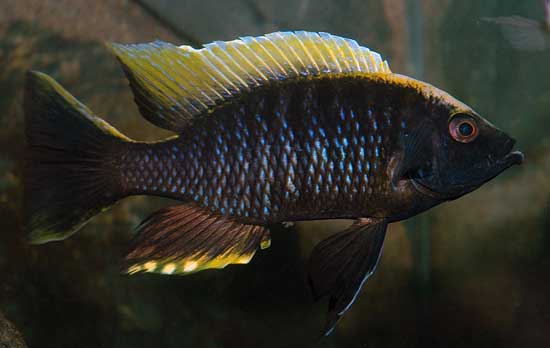 Above Copadichromis geertsi, Female in foreground, Male, in breeding dress behind. Photo by Tom Rejczak.

According to Fishbase, this fish was named " . . . after Martin Geerts, Dutch aquarist, one of the compilators of the Catalogue of Cichlids."

According Ad Konings (Malawi Cichlids in their Natural Habitat), this fish was found in deep water exceeding 25M at Gome and Masinje in Malawi and Meponda and Thundu in Mozambique.

Because Copadichromis geertsi gets big, it should be kept in large tanks 125 gallons or more. They prefer alkaline water about 76 to 82F degrees. The tank should contain fine gravel and some rockwork. The best ratio for breeding is one male to three females .

My fish were fed with Spectrum pellets and live and frozen brine shrimps and frozen mysis.

If you want to breed Copadichromis geertsi, you definitely need patience. My wild caught fish did not breed until two years after I got them. The male constructs a sand crater that is 15" diameter and 6" deep to attract females. Female incubate the eggs for 30 to 36 days.

The fry are very big, around 3/4 inch long. Spawns range in size from twelve to eighteen. I recommend removing the female to a 30 to 50 gallon brooding tank. Make sure you cover the tank as these fish jump. and cover from outside. I believe this reduces stress and the possibility of eating or spitting out eggs is reduced to minimum. My first food for the babies were live microworms. After several days I gave them Spectrum Grow Formula and frozen Daphnia.

A wild-caught breeding pair of Copadichromis geertsimight be much over $200. I have not seen juveniles on the market, but I guess that two-inch fish might go for around $30-40.