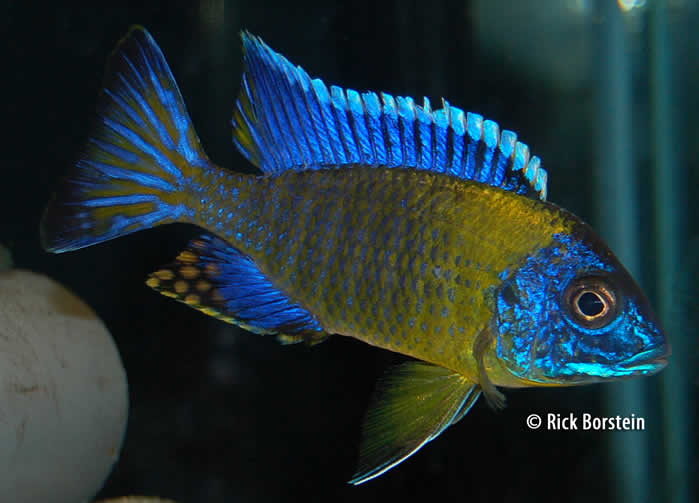 Note We originally listed this fish as Aulonocara"Maulana Bi-Color 500". Mike Garibaldi (and others) questioned the location. We sent a hi-res pic on to Ad Konings who made the call that this fish was the "Undu" location.

Aulonocara stuartgranti"Undu" is a mouthbrooding cichlid native to Undu Reef in Lake Malawi in Africa. Aulonocara species, often called Malawi Peacocks, or just Peacocks, are colorful fish which have quite a following in the tropical fish hobby. Colorful peacocks always seem to be in demand.

This fish is a member of the often nicely colored Aulonocara stuartgranti complex. The "Undu" location is offered referred to in the pet trade as a Blue Neon Peacock. The distinguishing trait of the male Undu is an overall blue body with a wide band of yellow behind the head. Female Undus are tan-grey with a few vertical bands and no other color.

Male Aulonocara stuartgranti "Undu" get up to around 3.5 to 4 inches. Females stay smaller at about 3 inches.

Aulonocara stuartgranti"Undu" is found in the transitional habitat of Lake Malawi between fifteen and forty feet deep over sand bottoms.

Aulonocara stuartgranti"Undu" is not a difficult fish to keep. Provide a sand or fine gravel substrate. A tank temperature of 76-78F and neutral to hard water is ideal. Do not keep this fish with any other Aulonocara species as it may interbreed.

In the wild, Aulonocara stuartgranti"Undu" feeds on invertebrates found in the sand. All Aulonocara species possess sensitive pits on the underside of the head which allow them to detect subtle prey movement in the sand. In the aquarium, the fish accept a variety of prepared foods. I fed Spectrum, HBH Graze, HBH Cichlid Flakes, HBH Soft and Moist and the occasional treat of blood worms or frozen brine shrimp.

I obtained a beautiful trio of Aulonocara stuartgranti"Undu" from John Hansen when I visited him at his home in Pearcy, Arkansas. John is an ACA member and has spoken to the GCCA in the past. In John's large fishroom, I was able to choose my trio from a 300 gallon vat containing about fifteen pairs of fish. Of course, I picked the brightest, best-looking male! Some money changed hands and packed up the fish for the plane ride back to Chicago.

I placed the fish in a 125-gallon cichlid community tank with a fine sand substrate. Tankmates included Neolamprologus toae and Pseudtropheus porchi. The fish settled in fine and could often be observed digging in the sand. Compared to other peacocks I have kept, Aulonocara stuartgranti"Undu" is not very aggressive.

Aulonocara stuartgranti"Undu" breeds like other peacocks. Once the fish are sexually mature (12-16 months, typically) males will begin to court females. The male will extend his fins and circle the female, eventually bringing her to small pit dug in the sand or a depression near a rock. The female will lay an egg, pick it up in her mouth, and then nudge the males genital pores (eggspots) to receive his milt and fertilize the egg.

Twenty to thirty eggs are generally laid. My habit is to strip the fish at 12–14 days post spawn. At this point, the babies are at the heads and tails stage. I move them to clean tank or container containing a sponge filter and about 80% new, fresh water for another four to eight days. At this time, almost all of the eggsack will be gone and the babies will be free swimming. At this point, start feeding small amounts of freshly hatched baby brine shrimp.

One week later, I move the fry to larger ten or fifteen gallon tank for growout. After thirty days, the fry should be one-half to five-eights inch long.

Aulonocara stuartgranti"Undu" is occasionally available at pet shops that specialize in cichlids. Expect to pay about $75 for a trio of adult fish. Unsexed juveniles are generally in the $8–$10 range.