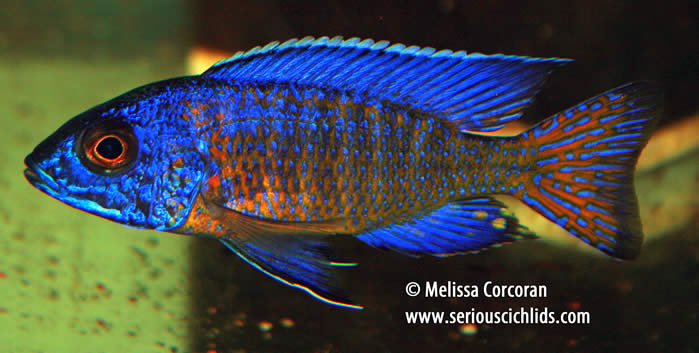 This fish is one of the many subspecies of fish originally grouped together as Aulonocara stuartgranti. Included in this subspecies are Mdoka, Usisya, Cobue and Flavescent and others. Re-classification of fish is constant and the Aulonocara is no exception. Some of these fish have been renamed Aulonocara hansbaenschi.

As far as I know, the Ngara is still classified as a stuartgranti, but reclassification of this fish is not beyond reason. When this fish was first imported into the country it was called the "flametail peacock". This name has recently resurfaced with a whole new connotation, higher prices. A. Ngara "Flametail" now seems to mean that the fish has been bred for color.

There is an intensely red strain of A. Ngara in the Chicago area, originally bred by Rick Boester, that is sometimes referred to as A. Ngara "Red".

Aulonocara stuartgranti"ngara" is from the northwestern shore of Lake Malawi, not surprisingly near Ngara. Males reach a size of about 6-8 inches, females somewhat smaller. As with most Aulonocara, the Ngara like a rocky area close to a sandy bottom. Lone males will stake out a claim near rocks and lure females from their groups to spawn.

In the aquarium, a good sandy bottom with caves will do nicely. One male with 4-6 females is a good ratio for a breeding colony. I house my Ngaras, as well as most of my Aulonocara colonies, in 50 breeders. Smaller Aulonocara may be housed in 30 longs or 40 breeders.

Aulonocara stuartgranti"ngara" is a crustacean and insect larvae eater by nature. I fed mine anything from redworms to frozen brine shrimp to flake food. They accept all with vigor. The young are fed newly hatched brine shrimp exclusively for about two weeks and then I integrate flake food.

Aulonocara stuartgranti"ngara"can breed about every thirty days with females carrying anywhere from 5 to 50 eggs. The size of the spawn is relative to the size of the female. The longer you allow the female to brood the eggs, the longer the interval will be between spawns.

If you plan on obtaining Aulonocara stuartgranti,, know what color variety you are purchasing. Don't be fooled! The price can vary greatly. When buying adults, the difference is obvious. When purchasing fry, if at all possible, see the parents first. If not, buy from a reputable dealer.