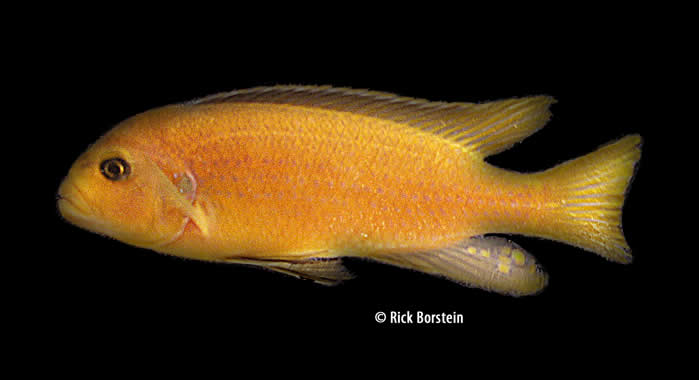 Metriaclima sp. “kingsizei lupingu"is a undescribed moutbrooding Malawian mbuna. This fish is available in a few variants; the gold variant shown above, blue fin, and a blue-striped. All three types can be seen at the same location, Lupingu.

The gold variant is rather new to the hobby, having been imported in the last ten years or so. Males of the gold variant exhibit an even gold-orange color and, when in breeding mode, exhibit light blue coloring on the upper flank. Females look similar, but do not exhibit blue coloration.

Metriaclima sp “kingsizei lupingu”"gold" is found near rocky reefs at depths of 15 to 75 feet .

Metriaclima sp “kingsizei lupingu”is simple to maintain. I housed 8 individuals in a 125 gallon tank with other Malawians with no problem..

Regular water changes are important. I perfomed weekly water changes equal to 50% of the tank volume, but you can probably do less in a more sparsely populated tank.

Males can be aggressive, so provide hiding places such as rockworks and caves. If you wish to breed this fish, provide a flat spawning slate or similar (I used unglazed quarry tile).

Metriaclima sp “kingsizei lupingu”is a bit more challenging to breed than other mbuna. Because they don't get very big, they can be easily dominated by larger, more aggressive fish. For this reason, I recommend a species tank for this mbuna.

I obtained eight juvenile fish from fellow GCCA member Mike Garibaldi. The fish grew fairly quickly to about three inches, but I did not have any spawns and became frustrated.

I was convinced, at one point, that I had all male fish. I sold off six of the my eight fish keeping only the largest fish and the smallest fish. At this point, I ran into a space crisis in my fishroom and reluctantly added a large pair of Jack Dempseys. Fortunately, no problems ensued and the fish spawned on October 30, 2003.

I immediately stripped the female of about 25 large, yellow-tan eggs and hatched them artificially in a commercial egg tumbler. I added Acriflavine plus as an anti-fungal and surpisingly didn't lose any eggs.

The fry became free swimming on 11-22. I moved them to a 5-gallon grow-out tank and they immediately took freshly hatched baby brine shrimp.

With regular water changes, the fry grow quickly and will start accepting flake food at around 30 days after becoming free-swimming. By December 30, as I write this the fry are about 1.25" long and ready for sale.