9 years 6 months ago #37352 by libasci
Pseudotropheus polit was created by libasci
... 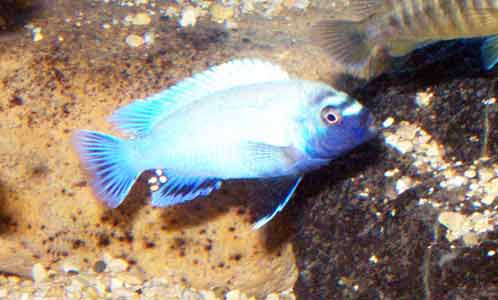 You can guess the habitat of this fish by just knowing Pseudotropheus polit is a Rift Lake Cichlid. It likes hard alkaline water and a temperature of about 80 degrees F. They are relatively hardy and can stand extreme conditions. As I said before, the males are aggressive, and I wouldn’t recommend anything less than a 40 gallon tank. If you put multiple males in a tank, you are asking for trouble. Of course, a larger tank would accommodate more than one male although he will be sub-dominant. Also, use as many females as you can get, 6 or 8 females would be great. The male will divide his aggression over all the females. Of course, plenty of caves are in order.

As with most African Cichlids, Pseudotropheus polit is not a problem child. Proper temperature, ph, hardness and weekly water changes of about 25% make this fish extremely happy.

In the wild, a large part of the Pseudotropheus polit's diet consists of vegetable matter, so regular feeding of a vegetable flake is necessary. Any over the counter spirulina or algae type flake or pellet is readily accepted. They will eat almost anything given them, but give a large variety of foods such as earthworms, brine shrimp, pellets and/or flake foods. Remember, they are an mbuna.

Pseudotropheus polit is a good producer of young. Good thing, too. They aren’t imported often and they are in high demand. They are typical spawners, the male will flash the female and coax her into laying her eggs. The female will lay one or two eggs, turn around and pick them up into her mouth. As she does, the males will wave frantically in front of the female while releasing his sperm. The female will then lay a couple more eggs and so on. Courting usually takes an hour, half of that time will be spent chasing intruders away. Once spawning is complete, the male will chase the female away and wait for the next ripe female to come along. The female will then find a hiding place to incubate her mouthful. She will be harassed, so have adequate hiding places.

At retail, fry will be expensive at $20 or higher. Young adults will probably fetch closer to $35 or $40. The two people whom I know that breed these fish seem to have a higher ratio of males to females. That’s both good and bad. If you are trying to spawn this fish, it’s bad (not enough females). If you’re selling fish, it’s good, males are much more colorful and in demand.

Pseudotropheus polit is not a rare fish but not one you see everyday in your local aquarium. Ask the store owner about them, he might be able to pick some up for you from one of the local breeders. Be prepared for sticker shock— they will be expensive!