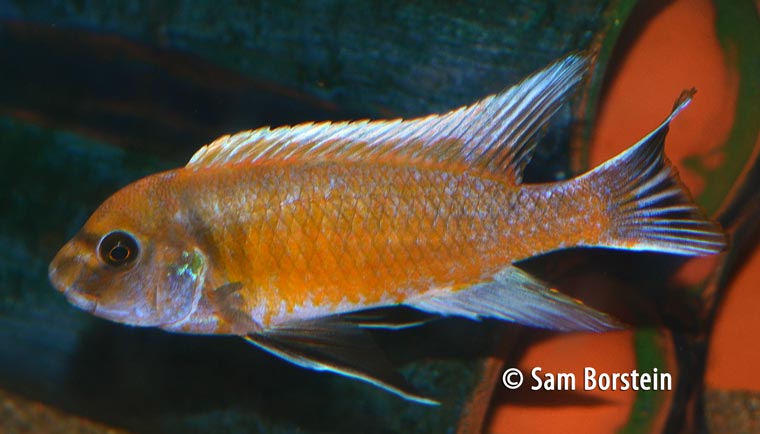 Labeotropheus trewavasae is a mouthbrooding Malawian cichlid first typed by Fryer in 1956.

This scientific name is Labeotropheus trewavasaehas an interesting derivation. "Labeo" is a reference to an African cyprinid it is thought to resemble and "tropheus" means eater. The species name "trewavase" is an honorific for Dr. Ethelwynn Trewavas, prolific scientist who identified many African cichlids.

Labeotropheus trewavasae is generally thought to be sexually dimorphic, but keep in mind that this fish is highly variable in coloration, a statement which applies to both males and females. In addition, these fish change color almost instantly in the aquarium during threat or courting displays. The male above which is mostly rusty in coloration at other times looks solid blue.

In the hobby, I've mostly seen the type above. The females in my group were OB (Orange Blotched, a general term for spotting in cichlids).

There are many good looking morphs available in the hobby including the very popular "Maramalade Cat" which has has a lot of blue and orange blotches.

Males in the aquarium can get quite large, up to seven inches and females generally stay smaller. In the lake, I suspect they stay much smaller.

Labeotropheus trewavasae is found in the rocky habitat of Lake Malawi.

Labeotropheus trewavasae is a robust fish and males can be tough on females, especially in small aquariums. Provide ample rockwork or other hiding places. Like other Malawi cichlids, hard water from 76-80F suits them well.

In the wild, Labeotropheus trewavasae uses its downward pointing mouth to scrape algae and small organisms from the rocks. In the aquarium, they readily accept a variety of prepared foods. A recommend feeding a food high in vegetable content. I fed HBH Graze, Dainichi Veggie Deluxe Pellets, Extreme Pellets and other foods.

I obtained eight BAP fish at a GCCA meeting sometime in late 2010. I don't remember who bred the fish, but the juveniles were about 1.5 inches. The group turned out to be five males and three females. I placed the fish in a 75-gallon long tank along with three Lithochromis xanthopteryx, four Neolamprologus prochilus and four Paratilapia polleni. The tank had a sand substrate and was filtered by two large Swiss Tropical sponge filters, I performed weekly water changes equal to 50% of the tank volume.

This grouping of fish worked well. The varying shapes and patterns of the fish meant that interspecific aggression was quite low, but there were enough individuals to deter aggression within a species. (You breed 180+ cichlids and you begin to figure this stuff out!)

At about fourteen months, the Labeotropheus trewavasae males were over four inches long and the females about 3.5 inches. Now that the fish were fully mature, I began to witness regular courting behavior. Males, which were normally dark blue, would quickly display to females and change color to a rusty hue. I anticipated breeding and was rewarded in October 2011 with a holding female. The fish's buccal cavity was distended, so it was easy to tell that the fish had bred.

I allowed the female to hold for 14 days and stripped her of seven enormous fry at the heads and tails stage. Labeotropheus trewavasae is known to have some of the largest eggs in the cichlid world, probably the largest of the mbuna.

About eight days after stripping the babies, they were free-swimming 3/4 inch fry which looked quite a bit like their spotted mother. The fry grow quickly and present no problems.

Labeotropheus trewavasae is often available at retail and is usually inexpensive. Two-inch juveniles are usually less than ten dollars.