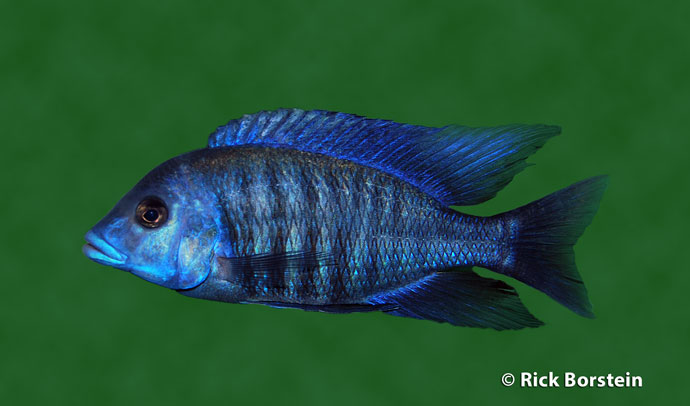 Above: Protomelas annectens. Photo by Rick Borstein. Video available below.

Protomelas annectensis a mouthbrooding cichlid from Lake Malawi, Africa. It was first typed by Regan in 1922.

Protomelas annectens is a large and active fish. Males get up to about nine inches while females stay an inch or more smaller. The overall base color of the fish is a grey-blue. Dominant males have a steep cranial profile, a blue head and a horizontal stripe which is overlayed (usually) by blue sheen. Some irridescent scales may appear on the upper flank. The caudal fin is usually black and may be edged in a dull blue or grey.

Protomelas annectens tends to show off differently depending on the substrate and tank background. With dark substrates and backgrounds, the fish will appear almost black. If you hope to see the bluest fish, keep this fish over a light substrate with a brighter background.

Protomelas annectens is typically found at depths of about 5-10M over sandy areas of the lake.

Protomelas annectens is a not a very aggressive cichlid, but since it gets fairly big, a four foot or larger tank with a sandy substrate is recommended. Lake Malawi has hard water, generally from 75-80F, so supply the same. My fish did fine in ordinary Chicago water (pH 7.4) at 78F. Males do not aggressively molest females or sub-dominant males, so little damage if any occurs. Still, provide some cover for sub-dominant fish.

In the wild, Protomelas annectens is one of the so-called "follower cichlids" which trail behind other substrate sifting cichlids, picking off food items that are stirred up in the water column. Konings notes that this fish does not exclusively utilize these leftovers and makes use of other resources as well. Whatever the case, this fish is easy to feed in the aquarium, readily accepting Tetra Cichlid Sticks, Extreme, New Life Specture and Dainichi Pellets, etc. I fed copious amounts of Repashy Spawn and Grow (Gel Food) which quickly got females into condition.

I obtained a group of eight, adult wild Protomelas annectens from fellow GCCA member Jason Libasci and placed them in a four foot, 90-gallon tank with a light green background and a sandy substrate. The tank contained numerous caves and rockwork and was filtered by a TidePool II wet/dry filter.

As mentioned above, I fed Repashy Spawn and Grow which I have found to be a great conditioning food for large Malawians. The females soon grew fat and within three weeks of getting the fish, I had my first spawn. I allowed the female to hold for 14 days after which I stripped her of 28 large, elongated fry.

I offered live baby brine shrimp as a first food and the babies grew steadily. At six weeks of age, they are a almost 3/4" long and eating flake food.

Protomelas annectenshas has been seen recently on some specialty cichlid sellers website. Wild-caught fish would be $60-$80 each. F1 fry, if you could find them at 1-1.5", would be about $8 each.