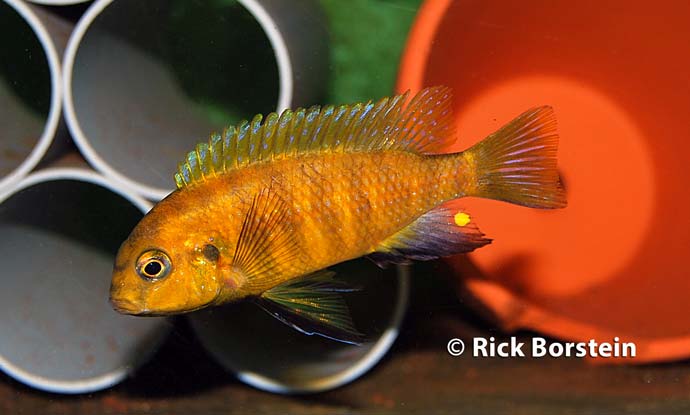 Females and juveniles, have an overall silver to grey base color with an interesting tiger-like pattern of very dark stripes. Males are a golden green color with dark edges to the fins. Overall, both males and females are very nice looking fish. A large male might get up to about four inches and females stay slightly smaller.

Tropheops sp. "Olive Tiger"  is an active fish and make for an entertaining and colorful display. 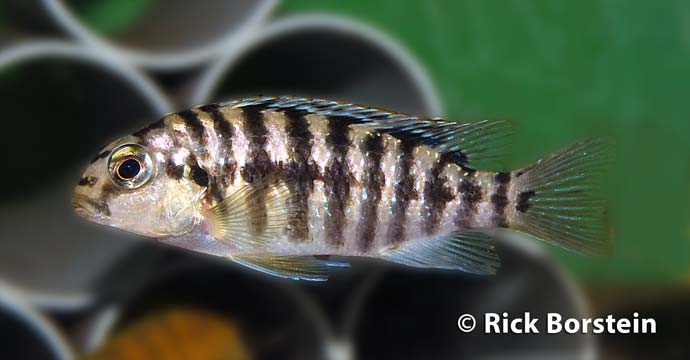 Tropheops sp. "Olive Tiger" is found in the shallow, turbulent and rocky habitat of the lake.

Tropheops sp. "Olive Tiger" is a somewhat aggressive cichlid, so it is recommended to create a heavily landscaped tank with numerous rocky hiding places for females and sub-dominant individuals. As far as tank temperature, aquarists should take a clue from the normal temperature of Lake Malawi which is between 74°F and 79°F with high hardness. I had no trouble keeping this fish in Chicago water at 78F. I performed regular partial water changes each week of about 25% of the tank volume.

In the wild, Tropheops sp. "Olive Tiger"  is an algal garden tender. Males and females stake out an area about a meter in diameter and scrapes and tear filamentous algae for their meals. For this reason,  offer a diet high in veggie matter. I fed Dainichi Veggie Deluxe Pellets, Repashy Community Gel Food, Repashy Soylent Green Gel Food and Extreme cichlid pellets. 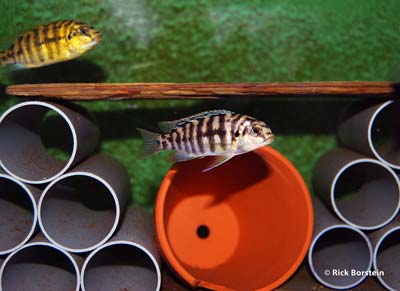 I obtained a group of nine, adult Tropheops sp. "Olive Tiger" from fellow GCCA member Jason Libasci. I am a big fan of yellow fish, so I was excited to get this group into an open 90G, four-foot aquarium. This tank had a sand substrate and was filtered by a Tidepool II wet/dry filter. I did take special care to landscape the tank with several cichlid condos (PVC pipe structures, see picture) which I stacked to create a multi-level structure.

As mentioned previously, this is a moderately aggressive fish. Both males and females will make runs at each other, sometimes spinning about in impressive displays (see video). Fortuntely, the cover I provided for the fish and prevented any serious damage between individuals.

I was lucky in that within a week or two after obtaining the group,  courting began. The bright yellow males would extend their fins and display to females hoping to lure the girl to an empty spot in the sand or within a piece of PVC to breed. Shortly after seeing courting behavior, I observed females holding fry. I allowed the females to hold about twelve days at which time I stripped them of about twenty large-ish fry. The fry were immediately able to eat frozen, baby brine shrimp. The babies grow quickly if provided with multiple feedings a day, clean water and ample quarters.

Tropheops sp. "Olive Tiger"has recently been more popular on the internet, but it is not likely you will see this fish at your local pet store. Expect to pay about $6 to $8 for 1.5-inch juveniles and about $15 to $20 for adult, tank-raised fish.