6 years 1 month ago #35321 by scubadiver
Replied by scubadiver on topic Nyassachromis prostoma "Orange Cap"
Forum Thread
Are you looking to be involved or commited
A Pig and a Chicken are walking down the road. The Chicken says, "Pig, I was thinking we should open a restaurant!". Pig replies, "What would we call it?". The Chicken responds, "How about ham-n-eggs?" The Pig thinks for a moment and says, No thanks. I'd... 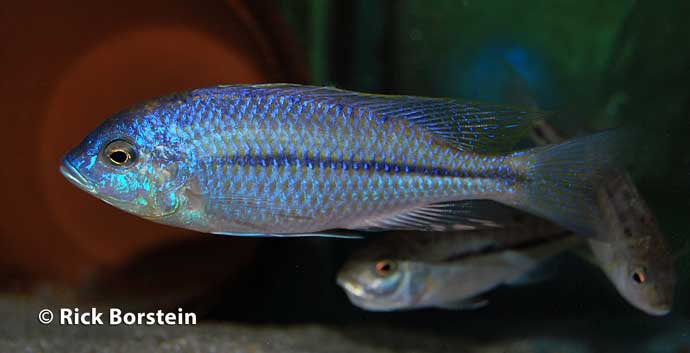 Above: Nyassachromis prostoma. Photo by Rick Borstein. Video available below.

Nyassachromis prostomais an mouthbrooding cichlid from Lake Malawi, Africa. It was first typed by Trewavas in 1935.

Members of the genus Nyassachromis prostoma were formerly placed in the Copadichromis genus, but Konings advises that juvenile color pattern was one reason why these fish were split into a new genus. Nyassachromis  are characterized by a rather small head and narrow body and conspicuous line on the body. Males get up to six or seven inches while females stay smaller. This is a mostly silvery fish, but males have a nice bright blue sheen to the front third of the body and over the flank. The orange cap variety can have reddish coloration on the head, but it is not always very visible. The dorsal offers some red coloration, but the anal fin is mostly nondescript with only an egg dummy or two. Females are smaller by an inch or two and are silver with a blue sheen.

Nyassachromis prostoma is a not a very aggressive cichlid and presents few problems. This fish should definitely be kept over sand since bower building is a prelude to courtship. My group did great in ordinary Chicago water (pH 7.4) at 78F.

In the wild, Nyassachromis prostoma is an open water planktivore, but it is not difficult to feed in the aquarium. Flake food, Repashy Spawn and Grow, New Life Spectrum and Xtreme pellets were all eagerly accepted by my group of fish.

I obtained a group of eight, adult Nyassachromis prostoma from a GCCA Rare Fish auction in 2013. The fish were a couple of inches long when I got them and I placed them in a 90-gallon tank with substrate of quartz pool filter sand. This tank had only a few rocks for landscaping and was filtered by a TidePool II wet/dry filter.

I have found Repashy Spawn and Grow to be a great conditioning food for large Malawians. When the males were about five inches long, I observed the largest individual digging pits in the sand. This large male dug a pit which was at least three inches deep and about a foot around. A couple of weeks later, I observed my first female holding. I allowed the female to hold for 14 days after which I stripped her of 22 large fry. I offered live baby brine shrimp as a first food and the babies grew steadily. 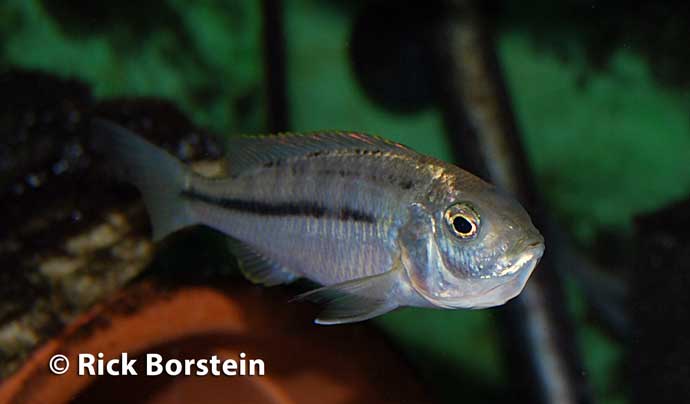 Nyassachromis prostomahas is occasionally available on cichlid sellers website. Wild-caught fish would be $60-$80 each. Two inch juveniles go for about $8 to $12 each.