Less More
7 years 3 months ago #34459 by scubadiver
Replied by scubadiver on topic Mylochromis ericotaenia "Itungi"
New FOM
Are you looking to be involved or commited
A Pig and a Chicken are walking down the road. The Chicken says, "Pig, I was thinking we should open a restaurant!". Pig replies, "What would we call it?". The Chicken responds, "How about ham-n-eggs?" The Pig thinks for a moment and says, No thanks. I'd... 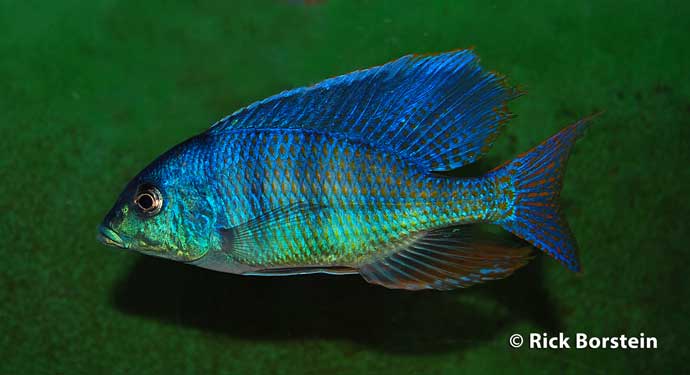 Above: Mylochromis ericotaenia Photo by Rick Borstein. Video available below.

Mylochromis ericotaenia, is a large, mouthbrooding haplochromine cichlid from Lake Malawi, Africa. This fish was first typed by Regani in 1922.

Females and juveniles are attractive with four to eight vertical stripes which may be either partial or extend completely down the flank. Males are dramatic looking fish with a large extended, almost sailfin-like dorsal. Males have a rich blue sheen and are covered with red dots throughout the flanks and the dorsal. Konings reports that large males may get a nuchal hump.

This is a large fish. Males may exceed eight inches in length while females stay a couple of inches smaller. 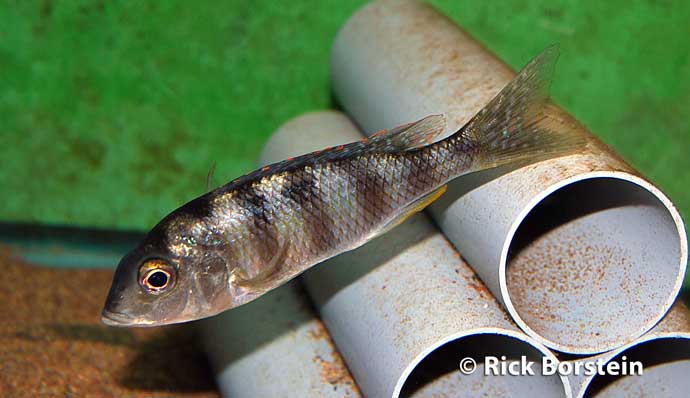 Mylochromis ericotaenia is found in the shallow, sandy habitat throughout Lake Malawi.

Mylochromis ericotaenia is not overlay aggressive, but the large size of this fish dictates that a four foot or larger tank is required. Tank temperatures of 75-80F and clean, neutral to hard water are ideal.

I haven't found much research on the food items for Mylochromis ericotaenia in the lake. My guess is that they are an invertebrate sand picker and might opportunistically eat some small fish. Regardless, this fish is not difficult to feed in the aquarium. I offered Tetra Cichlid Sticks, Exreme Big Fella, Dainichi Veggie Deluxe and the occasional treat of Repashy gel food.

I obtained two adult pairs Mylochromis ericotaenia from fellow GCCA member Mike Helford. Mike is a fan of large Malawi haps and always seems to have something interesting in his tanks. Lucky me, he needed tank space!

I placed the adult fish in a 90G tank which had a sand substrate which was filtered by Marineland Tidepool II filter. The tank was decorated with several large flower pots and flat slates. In addition, I added one of my "Cichlid Condos", a glued-up stack of 2" PVC pipes. Tankmates for the fish were three, four-inch Etroplus suratensis.

I have found that large, Malawi hap females often need to be brought into condition to breed. To do so, I  fed Repashy Spawn and Grow three times a week and soon both females fattened up quickly over the course of a month or so. After the conditioning period, I observed the dominant female holding. I allowed this female to hold for twelve days after which I stripped her of 46 very large fry at the heads and tails stage. I moved the fry in to a clean 2 gallon container which I maintained at 80F. Eight days hence , the fry were free-swimming and I immediately began feeding live baby brine shrimp.

The babies are very large and are voracious feeders. I was able to feed flake food on the third day free-swimming, which was a surprise to me! A few days later,I moved the babies to a 5-gallon tank for grow out. The babies are really cute with their prominent stripes.

Mylochromis ericotaenia is not a fish you will find at an ordinary pet shop. On the web, you may be able to find wild caught adults for about $50-80 each. F1 fry, if you could find them, would be $5-8 each.