7 years 4 months ago #34365 by scubadiver
Replied by scubadiver on topic Aulonocara sp. "Yellow Collar"
Here is the new FOM
Are you looking to be involved or commited
A Pig and a Chicken are walking down the road. The Chicken says, "Pig, I was thinking we should open a restaurant!". Pig replies, "What would we call it?". The Chicken responds, "How about ham-n-eggs?" The Pig thinks for a moment and says, No thanks. I'd... 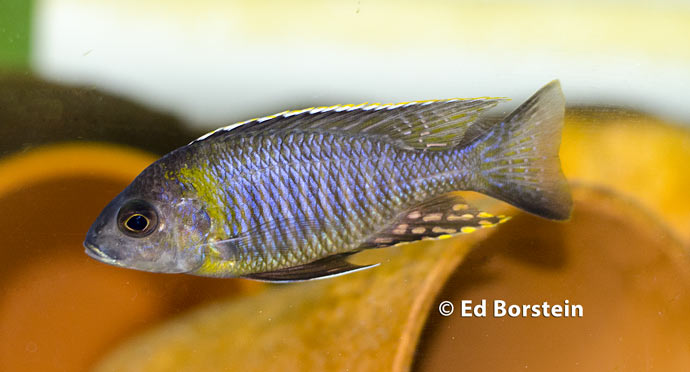 Aulonocara sp. "Yellow Collar", is a mouthbrooding cichlid from Lake Malawi, Africa. Aulonocara species are commonly called "Peacocks" because of their bright colors.

Males achieve a size of approximately four inches in length with females topping out at about one-half inch smaller.

Aulonocara sp. "Yellow Collar"  is found at the Nankumba peninsula in the lake at depths of 20 meters in the intermediate habitat.

Aulonocara sp. "Yellow Collar" does not present any problems. Peacocks are only moderately aggressive, so do not mix this species with aggressive tankmates such as Mbuna. Other than that, clean, neutral to hard water that is 75-80F is all you need.

I obtained eight juvenile fish from Scott Reiser during a visit to his large and well organized fishroom in January, 2012.  I placed the fish in a 90G tank which had a sand substrate. The tank was filtered by a large Tidepool wet/dry filter. Water temperature was maintained at 78F and were kept in standard Chicago water (pH 7.4, 300ppm hardness).

The fish grew quickly, but I lost most all of the females during a weird water changing accident (don't get me started). I later added three more females and by April 2013 both the males and females were up to their full adult size. To condition the females, I fed Repashy Spawn and Grow and they soon swelled up with eggs.

Shortly after, I observed the first female holding. I let the female hold for twelve days and stripped her of 21 fry at the heads and tails stage. I moved the fry to a two-gallon tank containing a small sponge filter. Eight days later, the fry were free-swimming and were able to immediately eat newly hatched baby brine shrimp. By six weeks, the fry were a tad over half an inch long.

I would not expect to find Aulonocara sp. "Yellow Collar" at a pet store. On the internet or from cichlid specialists, I would guess that unsexed juveniles are generally in the $8 to $12 range.