7 years 7 months ago #33982 by scubadiver
Replied by scubadiver on topic Copadichromis melas
Here is the latest FOM and huge thanks for Rick Borstein to being an amazing editor
Are you looking to be involved or commited
A Pig and a Chicken are walking down the road. The Chicken says, "Pig, I was thinking we should open a restaurant!". Pig replies, "What would we call it?". The Chicken responds, "How about ham-n-eggs?" The Pig thinks for a moment and says, No thanks. I'd... 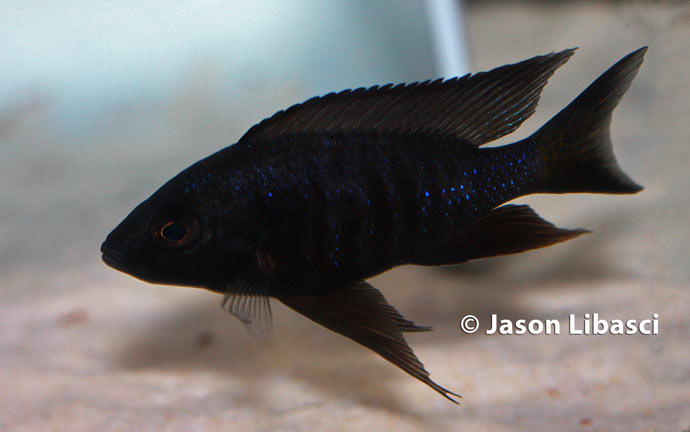 Above: Copadichromis melas.  Photo by Jason Libasci. See video below.

Copadichromis melas, commonly known as the Midnight Mloto, is a maternal mouthbrooder which is part of the Copadichromis Mbenji group. They can be found in Mara Point and Cobue, Mozambique of Lake Malawi. The climate is sub-tropical with temperatures in the mid 70's to 80's and native waters for this fish are pH of 7.4

Copadichromis melas is no exception to this nice looking fish of the group of fish when it comes to beauty, however it does not have brilliant colors being more of a midnight blue-black. In addition to being a beautiful midnight color, they have beautifully prominent fins, especially their pectoral fins.

Males achieve a size of approximately six inches in length. The male fish turn midnight black and depending on the location variant or strain show either a grey base or midnight blue base. Copadichromis melas reminds me of the midnight blue cars that were popular in the late 80s or 90s. The females attain a size of about four inches and are a silver-based fish with limited coloring and look like a typical female Copadichromis.

I obtained seven juvenile fish, which were approximately two inches long, from the GCCA's Rare Fish Auction. They started off in 20 gallon long and later were moved over to a 40 gallon Breeder tank once they reached three inches.

Copadichromis melas really need to be the dominant fish in the tank and also must have a female to display as nicely as possible in their brilliant black coloration. Once they have dominant colors, they can be placed in a tank without a female, but the colors change greatly depending upon their dominance. The tank in which I housed my fish was filtered by an Emperor 400 along with two large sponge filters and had a pH of 7.4. I performed weekly water changes of  approximately 80% of the tanks volume. Fluorescent lighting was used for a duration of approximately ten hours each day.

These fish are fairly aggressive for a Copadichromis and will dominate other Malawi haps of similar size. I found them to be pretty hard on hard on the females. My males would take a territory and just nail any other fish including the females that came into their space.

The fish were fed NLS cichlid pellets with the occasional frozen bloodworms or frozen brine shrimp for conditioning.

I ended up with two groups of Copadichromis melas, one wild trio that GCCA Member Mike Helford gave me as well my original group from the rare fish auction. I kept them separate as I felt they might have been from different location points, although did not have the paper trail to prove it.

The first (F1) group spawned about once every 6 to 8 weeks, but the females never held and when I pulled the eggs they never hatched. However, once I sold them and they were placed in a 75-gallon tank they spawned and held. I assume the 40-gallon breeder may have been too small for them. People have had challenges breeding them when they are too young as well.

The second group from Dr. Helford spawned very frequently and had no problems holding.

When spawning, the blackness and sheen of the males appears to intensify. I did not notice a change in female coloring. The breeding process was observed several times, each time they used a large flowerpot.

I stripped the female of about 45 fry at 15 days and the fry at that stage were fully formed for the most part with just a bit of their egg left. The fry were placed in an external fry container that was connected to the breeding tank so the water parameters and temperature were kept the same. The fry were silver in color and about three-eights of an inch long and looked very similar to the females.

The fry didn't require any special care on my part. They were left in the external fry container until they were bought to a GCCA meeting for BAP.

I would not expect to findCopadichromis melas at a pet store as it is currently not very common. Expect to pay about $100 for a pair of wild adult fish. Unsexed F1 fry and juveniles are generally in the $9 to $15. 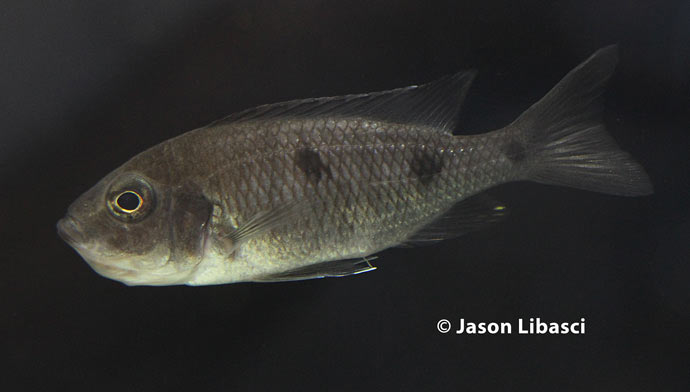 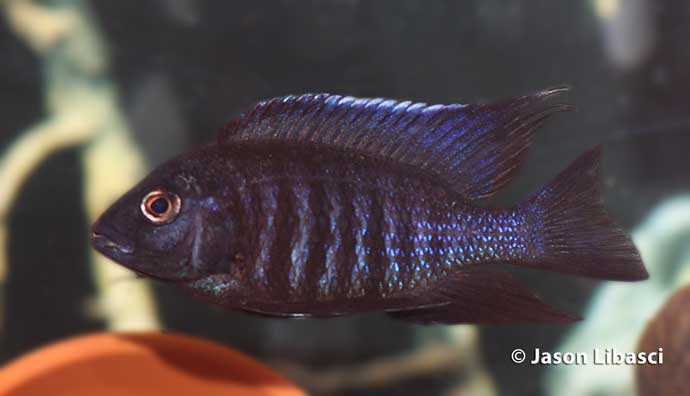