8 years 3 weeks ago #33579 by chicagolivebearer
Replied by chicagolivebearer on topic Aulonocara sp. "lwanda"
Yep, Lwandas are probably the most aggressive peacock I've kept, although I did have a really psycho Ngara a few years back that killed eight of his tank buddies.

Less More
8 years 1 month ago #33538 by CichlidMan777
Replied by CichlidMan777 on topic Aulonocara sp. "lwanda"
Nice I really enjoy reading the artical about your fish. I myself love lawanda's! I had a really nice lawand male but was taken out by a dominate female. I was really upset. Nice male though. 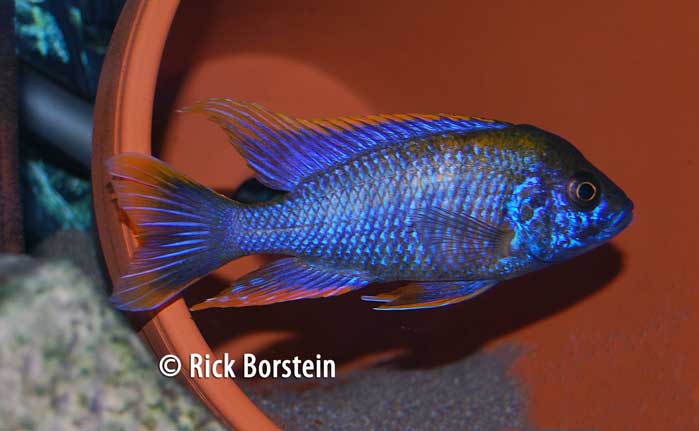 This fish is a member of the Aulonocara jacobfreibergei complex whose members are generally considered darker colored than the other groups. Aulonocara "lwanda" is currently undescribed. Scientists may move it to a new species or definitively classify it as a variant of the Jakes. Whatever the case, it is a large peacock and it is nice looking.MaleAulonocara"lwanda" get up over five inches and have a blue face, yellow collar and blue body. All of the fins, with the exception of the pectoral fins, are edged in yellow or yellow-orange. Females, like most peacock species, are drab and smaller, maxing out at about 3.5 inches.

Two locations associated with this fish are Hai Reef and Chiwindi.

Aulonocara"lwanda" is found in the shallow, intermediate habitat of Lake Malawi between three and ten meters. According to Ad Konings, it is a cave dweller.

While peacocks are generally not considered difficult to keep, Aulonocara"lwanda" may be one of the more challenging species due to intraspecific aggression. My experience is that they are tough on females. Provide a sand or fine gravel substrate and lots of caves and other hiding places. A tank temperature of 76-78F and neutral to hard water is ideal. Do not keep this fish with any other Aulonocara species as it may interbreed.

In the wild, Aulonocara"lwanda" feeds on invertebrates found in the sand. In the aquarium, the fish accept a variety of prepared foods. I fed Spectrum, HBH Graze, HBH Cichlid Flakes, HBH Soft and Moist and the occasional treat of blood worms or frozen brine shrimp.

I obtained an adult pair of Aulonocara"lwanda" from fellow GCCA member Jason Libasci. Lacking tank space at the time, I place the fish in a six foot 110G tank along with a group of small Paratilapia sp. "typus" and Lithochromis xanthopteryx. This proved to be a poor combo. The large male was able to defend himself, but the drab female looked a bit like the Lithochromis and these aggressive fish chased them vigorously. I also noticed that the male was quite aggressive with the female, too. Ultimately, the female didn't survive.

Aulonocara"lwanda" breeds a bit different than other peacocks. Konings noted and I observed that this fish does not dig a spawning pit. After a water change, I noticed the male extend his fins to entice a female to spawn, luring her to a flat rock at the mouth of a terracotta pot.

My habit is to strip the fish at 12–14 days post spawn and I obtained 22 babies at the heads and tails stage. I moved the babies to a clean, two-gallon clear plastic container containing a sponge filter and about 80% new, fresh water. About six or seven days later, almost all of the eggsack was gone and the babies were free swimming. I generally start the fry on two feedings a day. In the morning, I feed Cyclops-Eeze and in the evenings I offer a small amount of freshly hatched baby brine shrimp.

One week later, I moved the fry to five gallon tank for growout. After thirty days, the fry should be one-half to five-eights inch long.

Aulonocara"lwanda" is occasionally available at pet shops that specialize in cichlids. Expect to pay about $50 for a pair of adult fish. Unsexed juveniles are generally in the $7–$10 range.