6 years 3 months ago #35319 by scubadiver
Replied by scubadiver on topic Laetacara araguaiae
Forum thread
Are you looking to be involved or commited
A Pig and a Chicken are walking down the road. The Chicken says, "Pig, I was thinking we should open a restaurant!". Pig replies, "What would we call it?". The Chicken responds, "How about ham-n-eggs?" The Pig thinks for a moment and says, No thanks. I'd... 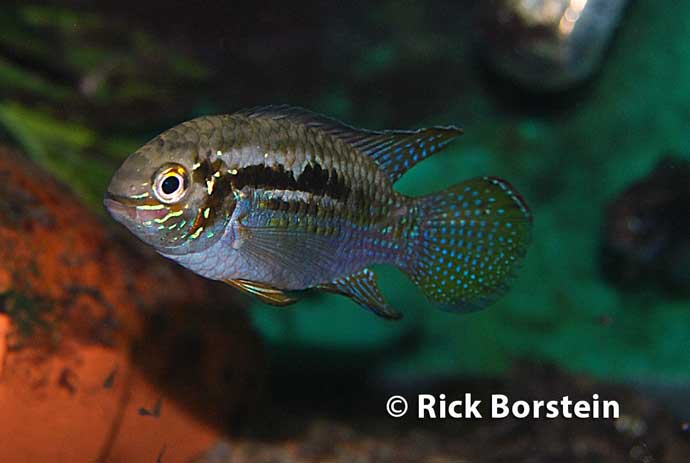 Above Laetacara araguaiae Male. Photo by Rick Borstein. Video below.

Laetacara araguaiae is a rather recently introduced biparental substrate-spawning cichlid typed by Ottoni & Costa in 2009. Prior to the official species designation, this fish was known by its popular German name of L. sp. ‘Buckelkopf’ which can be translated as humphead. I've never seen a male of the species with a humphead but perhaps very old specimens might have them.

The derivation of the species name makes sense to me, however. The genus name Laetecara roughly means "smiling cichlid" for the distinctive mouth markings. The species designation is for Rio Araguaie in Brazil which is the type locality of the fish.

At any rate, Laetacara araguaiae is nice little fish that is not too difficult to breed. In breeding color, both male and female show a blue-purple sheen with gold metallic highlights. There appear to be multiple strains in the hobby with some exhibiting more gold color, so the fish you obtain may not look exactly like mine. 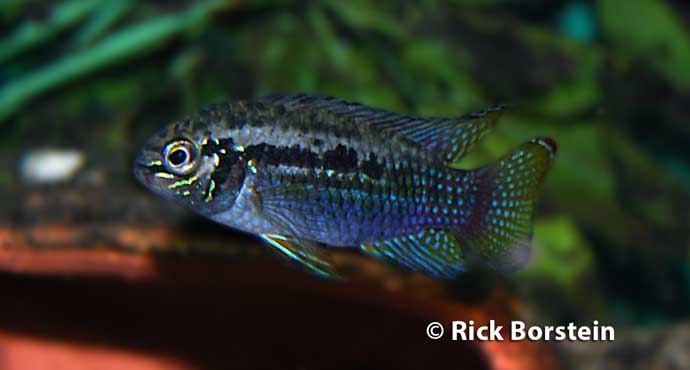 Laetacara araguaiae is a found in the Brazilian rivers of Tapajós, Xingu and Tocantins, but my guess is that this fish would be found in shallower water near cover.

Laetacara araguaiae is easy to care for and house. They do fine in varying water conditions and being a dwarf cichlid, you don't need a very big tank. A ten gallon or larger tank is recommended at water temperatures of 76 to 82F.

Laetacara araguaiaeis easy to feed. I feed a variety of flake and pellet foods with the occasional treat of frozen black worms.

I obtained six one-inch juvenile fish from fellow GCCA Member Mario Toromanovic. He was among the first people in the US to breed and distribute the fish. Early demand for this little cichlid resulted in initial high prices. Fortunately, Mario is a "cichlid buddy" so they arrived to me gratis!

I placed the young fish fifteen gallon long tank filtered by a five-inch Swiss Tropical Sponge Filter. This tank had a sand substrate, rocks and caves and was maintained at 78F. I performed weekly water changes of approximately one-third of the tank volume and the fish grew steadily.

When the female approached just under two inches, I saw the first signs of breeding activity. A pair formed and aggressively excluded the other fish from their territory. In fact, the sub-dominant individuals weren't just hiding, they were being exterminated. I'll note here that the behavior of my fish may be an aberration since other GCCA members bred siblings of my fish without any losses in smaller tanks.

Soon, I noticed that the female changed color (purple form shown in the pictures accompanying this article) and stayed close to a terracotta cave while the male patrolled nearby indicating that the fish had spawned. Within a couple of days, I saw the wrigglers and a couple of days after that the free-swimming fry. I fed the babies newly hatched baby brine shrimp and after two weeks weaned them to finely crushed flake food. I left the babies in with the parents until they were one-quarter inch long. Unfortunately, upon my return from a two day business trip, all the babies were gone.

I was relieved when the pair spawned again two weeks later. This time, when the fry were almost a quarter of an inch long, I removed the parents who I gave to another GCCA member.

The fry grow rather slowly and get to about one-half inch after eight weeks.

Laetacara araguaiae is not a fish you are likely to find at a pet shop unless the specialize in cichlids or have connections with local breeders. Currently, you can find it available from breeders on the internet. 1.5 inch fish to go for $10-12.