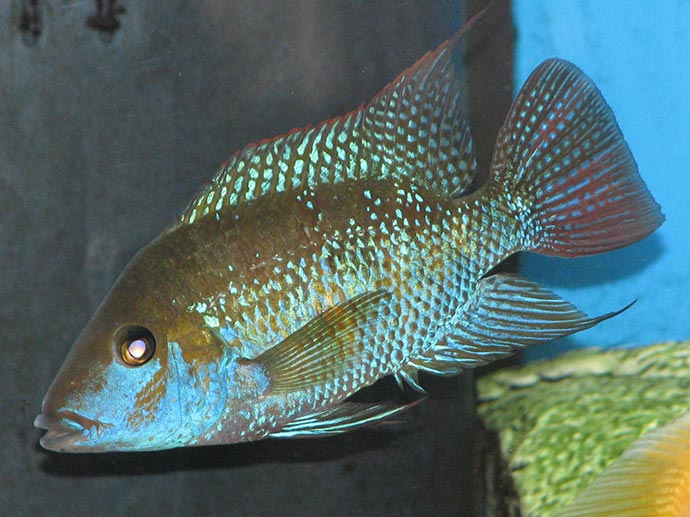 Above Astatheros robertsoni Male. Scroll down for picture of female. All photos and video by Mario Toromanovic.

Astatheros robertsoni is one of a dozen described species in Astatheros genus. It is native to Central America and inhibits the counties of Belize, Guatemala, Honduras and Mexico.

This species is an eartheater and exhibits similar behavior to the Geophagus species from South America. Astatheros robertsoni can grow up to ten inches and females are slightly smaller and less colorful. Males from different localities may have slightly different colors.

A large tank is a must for keeping Astatheros robertsoni. As a substrate sifting cichlid, they appreciate sand or gravel covered bottoms. I housed six adult Astatheros robertsoni in 150 gallon tank together with a group of six large Caquetaia myersi. Since I employed a 30 gallon wet/dry filter under my main tank, I wasn’t worried about large amount of waste that these fish produced. I performed bi-weekly water changes using tap water only. The tank was landscaped using large rocks and large driftwood to create hiding spaces. Astatheros robertsoni is a rather easy cichlid to keep. They will eat smaller fish (as shown in my video below), so be careful when choosing tank mates.

Astatheros robertsoni is omnivorous species so their diet consists of both meat and veggie based foods. I fed my fish with cichlid flakes and large pellets and occasionally with live food, like worms and night crawlers. The fish would never come up to feed on the surface, but sifted through the substrate, ingesting all edible foods and spitting out everything else.

Astatheros robertsoni was probably my biggest challenge and hardest species to spawn so far. I obtained six F1 juveniles from a GCCA rare fish auction about three years ago. I placed them in twenty gallon tank, and from there moved them several times to bigger tanks as they were growing out. Finally, almost two years later, when the fish were around 6-7 inches, I moved them to my 150 show tank. Astatheros robertsoni are great community fish. They are large enough not to be bothered by other fish, yet only mildly aggressive towards their tankmates. At least, that was the case until one year later when pair finally formed and start digging a pit between two rocks. Immediately, the fish changed colors with dark bars showing on their flanks.

Both the male and female began chasing other fish, pinning their tankmates up in one corner on the the top of the tank. The fish spawned a few days later. Once the eggs transformed into wigglers, the parents moved them to another pit, and then to another a day later. During the entire time, the male was constantly digging while female hovered above fry. On day eight post spawn, the fry become free swimming. It was a huge batch of 700-800 fry. At this point, both male and female become very aggressive, attacking other fish in the tank. On the third day after becoming free-swimming, the fry began swimming and following their parents. Since my 150 gallon tank was too big to raise such small fry, I scooped out few hundreds and place them in small five gallon rearing tank leaving the remainder with the parents. The parents did a good job raising the fry to about pea size, but lost many to other fish in the tank.I grew up remaining fry on diet of baby brine shrimp and crushed flake food.

Astatheros robertsoni are not too common, but they are readily available on the internet. Expect to pay $5 to $7 for juvenile fish.