Sent from my iPhone using Tapatalk
Are you looking to be involved or commited
A Pig and a Chicken are walking down the road. The Chicken says, "Pig, I was thinking we should open a restaurant!". Pig replies, "What would we call it?". The Chicken responds, "How about ham-n-eggs?" The Pig thinks for a moment and says, No thanks. I'd...

Less More
6 years 1 month ago #35414 by chefjimmy
Replied by chefjimmy on topic Parachromis Motaguensis "Red Tiger Mota"
Great looking Pair, you should come show me how to clean a tank like that. 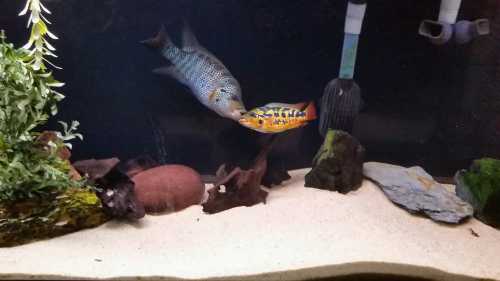 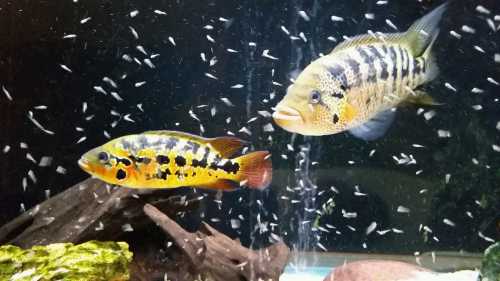 Less More
6 years 1 month ago #35406 by keltonsports
Parachromis Motaguensis "Red Tiger Mota" was created by keltonsports
After listening to the presentation and the awesome speakers last night at the meeting, I have decided to share my favorite pair of cichlids. This Parachromis Motaguensis "Red Tiger Mota" pair is a special pair. I bought them as fry on my honeymoon. Yes that sounds mushy but they are special because I was able to convince my wife on our honeymoon to go on a fish room tour. I found an ad on Florida's craigslist and she gave "us" permission to go (almost 3 years and 16 tanks later, this is still the only fish room tour she has been on).

Because these fish are special, they are the only fish I have ever named. The male is named Caliber after the car we drove down to Florida in, and the female is named Sanibel after the destination of our honeymoon. Caliber is probably a foot in length and a little over an inch in width. Sanibel is somewhere around 6 inches.

They live in a 125 all by themselves (except for some snails that appeared out of now where). They have spawned many times in the last year and a half. However I am terrible at raising new world fry (I have no problem growing Africans, but new world is another story). I only had one of their spawns reach 1.5 inch size and I was able to quickly sell them off to make room for their next spawns (to only kill the next 5 spawns). In the last 4 months I have been able to raise 3 from one spawn and about 20 from another. Both groups are around .5 inch. Good news is they spawned today while I was at work.

This is a pair of fish that I want to keep for a long time and keep their lineage for as long as I can. After watching many other males kill their females, I am going to keep most of the group of 20 to grow out and try to get a second pair. Based on my history, I can only pray that I end up with a new pair.

I'm going to try to include a video of the pair guarding their eggs that they laid today, as well as a couple of pictures with them surrounded by their last cloud of fry. But we will see how it goes.