7 years 1 month ago #34661 by scubadiver
Replied by scubadiver on topic Herichthys cyanoguttatus
Here is the new FOM - thank Mario
Are you looking to be involved or commited
A Pig and a Chicken are walking down the road. The Chicken says, "Pig, I was thinking we should open a restaurant!". Pig replies, "What would we call it?". The Chicken responds, "How about ham-n-eggs?" The Pig thinks for a moment and says, No thanks. I'd... 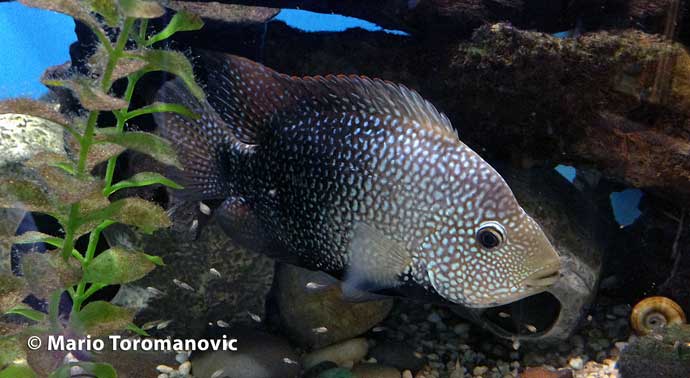 Herichthys cyanoguttatus, also known as the Texas Cichlid, is the only cichlid species native to North America. This fish was originally described in 1854 by Baird and Girard.

As a juvenile, the Texas cichlid is pearly gray with white dots on the body and fins and displays two characteristic black spots— one in the center of the body and the other at the caudal fin base. As the fish matures, the body becomes a golden shade with pearly highlights, and the fins and body become adorned with white and turquoise spots.

Adult fish are decorated with three black bars and the rear half of the body— including the caudal fin base— sports a profusion of small black dots. Once they are in breeding color, the underside and rear of the body turn black and the three black bars will become even darker. Full grown males can easily reach up to 12 inches, but females generally stay smaller, around 6 to 7 inches.

The natural home of the Texas cichlid is the lower Rio Grande Drainage in Texas and northeast Mexico. It can be found not only in the main river but also in smaller streams and pools, and is commonly referred to as the Rio Grande perch. It is a popular game fish in its natural habitat.

AlthoughHerichthys cyanoguttatus may withstand temperatures as low as 60°F for short periods, ideal conditions should fall between 72° and 78° and pH between 7 and 8. It was easy to duplicate its natural water parameters in my tank, since my Lake Michigan water has a pH 7.6 and I keep the temperature around 78°F.

Herichthys cyanoguttatus are omnivorous. In nature they feed on worms, insects and crustaceans, but they also have strong herbivorous tendencies and should have plenty of vegetable matter in its diet. I fed my fish with mix of veggie flakes and pellets that I use for my African cichlids, with occasional feedings of frozen Mysis and brine shrimp. I offered live black worms when conditioning the fish for breeding.

I obtained my group of eight, Texas Cichlid in trade with fellow GCCA club member. At the time I acquired the fish, they were five to six months old and approaching two inches in length. After few months of growth, it turned out that I had eight males. As the fish approached breeding size, aggression escalated, so I separated them into two groups of four fish. I was lucky enough to procure a full grown female from a friend at work. As soon as I introduced her to the group of males, she paired up with the biggest fish. The nine-inch male she selected was more than double her size of about four-inches.

Since Texas cichlids are substrate spawners, I placed a few terracotta flower pots and flat surfaced stones in the tank. There were also several hollow ceramic cichlid caves in the tank previously. To my surprise, the fish spawned inside of a big ceramic cichlid cave. After spawning, both the male and female guarded the eggs. The eggs hatched 3 days post spawn.

Herichthys cyanoguttatus are clutch tenders and both sexes are devoted parents. The male guarded the territory while the female stayed close to the clutch. Both sexes become extremely aggressive while tending to the fry. As soon as fry were free swimming, I offered them newly hatched baby brine shrimp, which they readily accepted.

Herichthys cyanoguttatus is quite common in the hobby and therefore easy to obtain. You can find them regularly from local breeders, or sometimes even in your local pet shop. In the aquarium trade, you may find fish sold under names such as blue Texas cichlid, green Texas cichlid, and red Texas cichlid. These common names can cause confusion because they are used for color variants of Herichthys as well as for hybrids and entirely different species.

Make sure to buy your fish from a reputable fish breeder or exporter and avoid buying hybrids. Juveniles are available from hobbyists in the $8-10 range. Breeding pairs in $50 range.