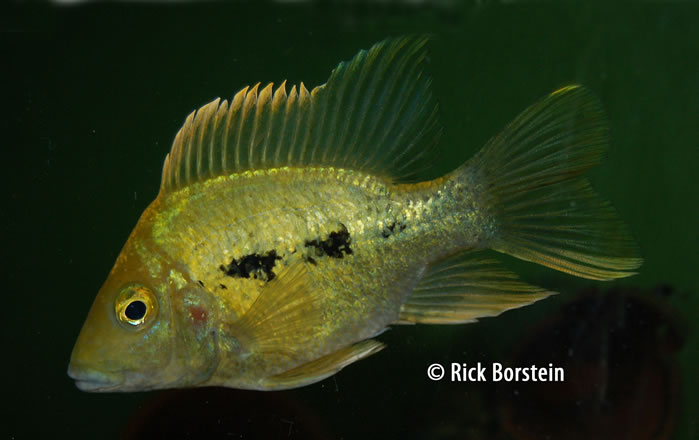 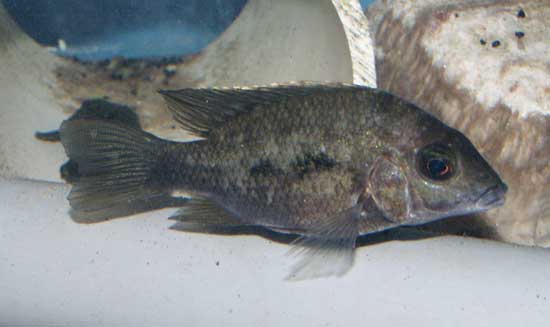 The Ptychochromine complex is a good place to start for cichlid hobbyists interested in trying Malagasy cichlids. This group of fishes is only moderately aggressive and can be bred in tanks that are 50G and larger. The behavior of Malagasy cichlids is notably different from other types of cichlids. Threat display, fry defense and courting can strike even an experienced hobbyist as odd.

Although none of the Malagasy cichlids are really common in the cichlid hobby, this fish is probably the one that is most likely to be encountered.

Depending on the collection location, age, sex, and mood of the fish, appearance may vary greatly from dull tan with dark markings, to dark gray to bright gold. The southerly collected specimens appear to have brighter coloration according to Patrick de Rham and Jean Claude Nourissat''s book The Endemic Cichlids of Madagascar. This is a tall-bodied fish. Like all Ptychochromines, this fish is slow growing. Males approach nine inches and females will top out at about seven inches.

Many cichlid hobbyists maintain Malagasy cichlids because so many of them are critically endangered because of habitat destruction in Madagascar. Ptychochromis grandidieriis in better shape as it is abundant— at the moment– on the island. Still, this fish is worthy of your attention as it is attractive and has interesting behavior.

There are a few special considerationsfor keeping this fish.

Ptychochromis grandidieriis found— as the common name indicates— in the eastern drainages of Madagascar at low elevations. It is often found in brackish habitats close to the sea in streams and marshy areas.

Ptychochromis grandidieriis particularly susceptible to ich and other skin infections. Many Malgasy cichlids have little natural resistance to these organisms and can "ich up" alarmingly fast. Common cures— dyes, copper, etc.— are only partially effective. Prophylactically adding salt at 1TBS per net ten gallons of water is a good idea, but these fish can tolerate even higher concentrations.

Ptychochromis grandidierishould not be kept with aggressive Central American cichlids. It is similar enough in body shape to be targeted as a conspecific. These fish are not very good at defending themselves.

Regular partial water changes and the replacement of salt is recommended. I did 25–50% weekly.

I originally obtained several juveniles of this fish at a Cichlid Classic in 2004. The fish grew slowly if steadily. My original group of six fish was reduced in number over time due aggression from inappropriate tankmates.

Once the fish got up over four inches, they bred about every three months. However, I did not get any viable fry. Upon inspecting the ovipositors of the breeding pair, I realized they were shaped identically (blunt, not pointed). My grandidieri were lesbians!

Short on tank space and long on frustration, I dropped off the remaining three fish to fellow GCCA member Rick Perez who had several Ptychochromis grandidieribreeding in a 100G tank.

Several months went by. Near closing time of GCCA's April 2007 Swap Meet, I noticed Ric selling off several trios of Ptychochromis grandidieri.I think he still had all of the specimens he brought with him. Unless breeding, these fish often don't show a lot of color and— stressed and confined in a bag— these fish were an unappealing muddy color. Ric was kind enough to give me a trio and I took them home and placed them in a 90G tank. This tank had a sand bottom and was filtered by a TidePool II Wet/Dry filter.

Within about a week, I witnessed breeding activity followed shortly by near disaster. The dominant pair picked on the remaining member of the trio and this fish quickly became covered in ich. Soon, the other two grandidieri were covered in ich, too. I treated with a variety of medications such as Melafix, RidIch and Aquarisol with only limited success. The eggs disappeared, too!

A visit to Ric Perez's fishroom resulted in an answer to these disease problems— Salt. Lots of salt! Rick had added two pounds of salt to his 100G tank. I returned home and added two pounds to my 90G tank and within a week the fish looked much better.

In the hatch tank, I used Acriflavine Plus as an anti-fungal. Four days post spawning, the fry began wriggling and were free-swimming by the end of the week. The fry were immediately able to eat baby brine shrimp and grew slowly.

Meanwhile, in the 90G, the pair of Ptychochromis grandidieridefended their babies and raised them up for three weeks before they disappeared one day. The parental care was a bit surprising to me as my previous experience with Ptychochromis sp. "Northern Red Fin" was that the fish in this genus were terrible parents.

A few weeks later, I delivered the trio to GCCA member Mike Helford who placed the fish in a heavily salted 75G tank. They spawned for him the next day!

I believe that the addition of salt could be a trigger for spawning these fish. Try reducing the salinity gradually, then do a big water change and add a lot of salt.