9 years 1 day ago #37366 by libasci
Katria katria was created by libasci
Young Katria... 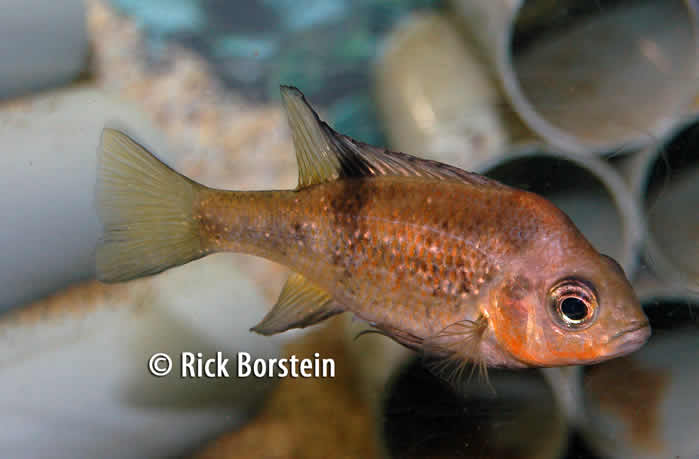 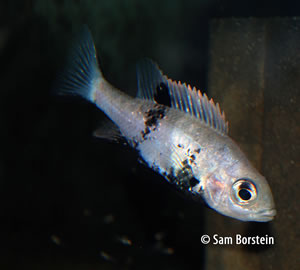 Katria katria is an enigmatic riverine cichlid endemic to Madagascar which was originally described as Ptychochromoides katria by Reinthal and Stiassny in 1997. In 2006, with the benefit of molecular analysis, Stiassny and Sparks moved this very interesting cichlid into the monotypic genus Katria. The main difference between Katria and Ptychochromoides is the coloration pattern and tooth and gill raker characteristics. Nourisat and De Rham reported a similar species from the Namorona river, but it is thought that this fish has been extirpated from the region and it has not been investigated further.

Katria katria is an attractive fish which can reach lengths of 5-6 inches. The main body color is a bronzy-orange body color, stretching to the mouth of the fish. The fish have a nice contrast with black markings and silver spots. Fins tend to be black. Male coloration is stronger than female. Males may develop an impressive nuchal hump.

The scientific name is derived from a local name for the fish. This fish is evaluated by the IUCN as vulnerable and is on the ACA C.A.R.E.S. list.

Katria katria is endemic to the Nosivolo river in Madagascar. The river is very fast moving and littered with rocks. There is very little aquatic plant life.

Katria katria can be highly aggressive and therefore needs a larger tank. I recommend a six foot tank for a group. It’s also a good idea to put in some durable, yet non-aggressive dither-target fish. I found some milder mbuna to work well.

Katria katria, like many Madagascan fish, enjoy high temperatures. I recommend keeping them at a minimum of 78F, but they seem to do best at the 82-84 degree range. Another concern when keeping this fish is that it comes from a riverine environment which means that Katria katria have high oxygen demands. While they need a lot of dissolved oxygen in the water, they don’t need a lot of current. I had four sponge filters running a lot of air in a 110 gallon for my fish.. Katria katria do require good water quality. Large weekly water changes of 50-75% are recommended.

Katria katria is easy to feed and accepts a vast array of food. Mine enjoyed a diet of spectrum, spirulina flake, and a mixed vitamin flake as well as the feeding of bloodworms and brine shrimp on occasion.

Katria katria become sexually reproductive around three inches. Katria katriacan be a bit of a challenge to breed and are probably best suited for the advanced hobbyist..

The fish change color before breeding to a color pattern reminiscent of Hericthys of Mexico; a white upper body and a black lower body. In the wild, these fish like to lay their eggs on hard surfaces and in the shallows. Lots of digging is witnessed before spawning and the fishes tubes will also be down for about a week while the fish are courting. Katria katriacan lay about 250-500 eggs.

Katria katria are good parents and guard the eggs and fry very well. The female will stay over the eggs and fry while the male defends the territory. My fish laid their eggs on a small terracotta tile and also up the side of an adjoining rock in a cave structure I built for them.

The eggs hatch in about three days and in another 3-4 days are free swimming. The fry are small, but capable of consuming newly hatched baby brine shrimp. It is very interesting to see the female communicate with the fry via fin flicks and how they respond to her jet black pelvic fins. The fry are easy to raise, but grow relatively slowly until they hit an inch and then they have a bit of a growth spurt and then slow down again.

Katria katria is a hobbyists fish and not one you will find at a pet shop. Katria katria is seldom available in the hobby. There are a few people breeding the fish and they can surface from time to time on some fish lists.