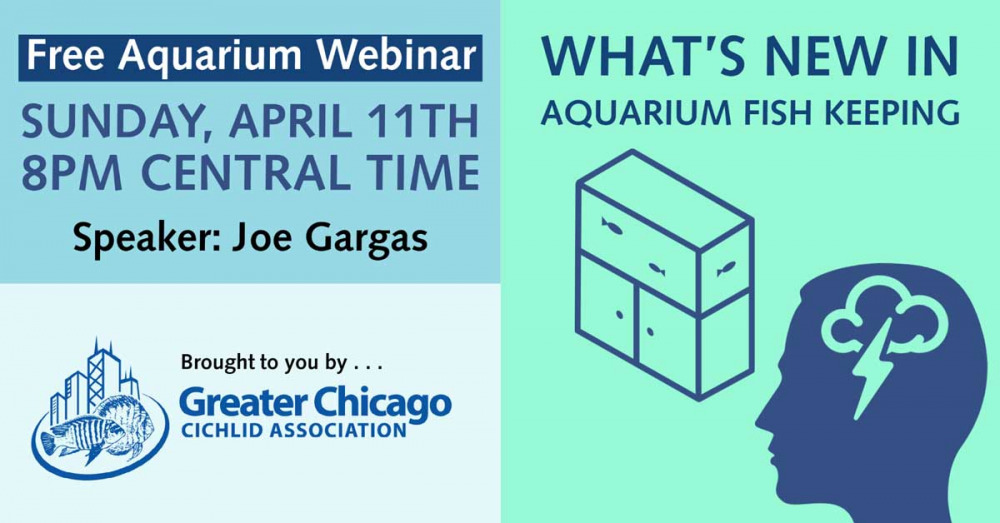 Free Webinar: Watch on your phone or computer

Join us at 8PM Central Time
Choose the Open in Browser option.

Do you ever wonder if the aquarium products that are offered for sale on Amazon and other websites really work? Especially if they are made in Asia or other countries outside the USA!

Joe Gargas does and and took a step further and purchased several of them on and on-going basis tests them. Being a former R&D Director of a major aquarium company, Joe has experience in testing products that are offered for sale in the aquarium trade. Joe will share his findings and show you where to acquire these products at the best prices!

Joe will also be giving away several prizes! At the end of our webinar, we will randomly pick winners for the following items:

Joe Gargas, a native of the South Suburbs of Chicago, began his interest in Tropical Fish in the mid 60’s when a aunt gave him his first fish tank with guppies. His interested in tropical fish stayed and grew through the teen years which grew into walls of aquariums. In the late 70’s he worked extensively breeding Discus as well as other hard to breed species of fish making extra money in the process.

Joe began writing for a number of Aquarium Fish Publications and had a column in one of them that ran for 7 years. He also began teaching a class that he put together at the John G. Shedd Aquarium in Chicago it was “Advanced Freshwater Fish Keeping” This was a 6 week 6-part course that he gave twice a year.

In the early 90’s he was approached by the Wardley Corporation in Secaucus, New Jersey (An Aquarium Fish Food Company) and was offered the job as a consultant. At this time he began doing the PIJAC “Freshwater Fish” certification seminar throughout the USA and Canada and the UK speaking on all aspects of the aquarium hobby. In the mid 90’s the Wardley Corporation was bought out by the Hartz Mountain Corporation and Joe was offered the job of the Director of Research for Wardley and he and his family were relocated to the Tampa Bay area where he lives today.

Joe lectured worldwide on behalf of the Wardley Corporation on all aspects of Tropical Fish Keeping and developed many products. He currently has a hatchery were he is breeding Discus, Rams and Angelfish selling to breeders and high end stores across the country and is currently an active member of the TBAS Tampa Bay Aquarium Society.

Through his research and expertise, he has helped aquarists/hobbyists keep their fish alive and remain in the hobby.