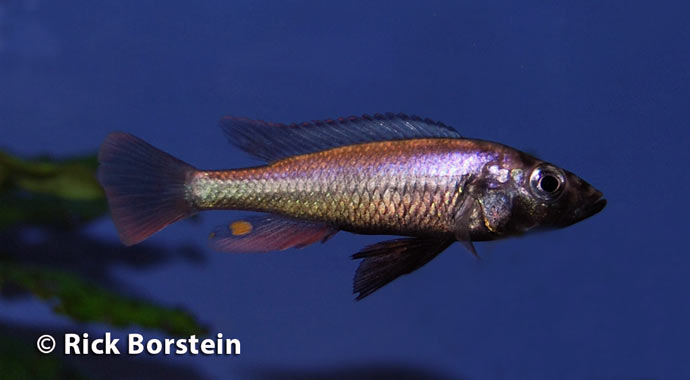 Haplochromis thereuterion, is a mouthbrooding cichlid from Lake Victoria, Africa. As most cichlid hobbyists know, Lake Victoria cichlid fauna experienced profound declines when the Nile Perch was introduced in the 1980s. Many cichlid species were thought to be lost forever and the subject of this article, Haplochromis thereuterion, was considered to be one of them. This fish was observed in the lake in 1996. Some internet sources label this fish as 'Haplochromis' (note single quote) indicating that perhaps this fish deserves to be placed in a new genus.

Haplochromis thereuterion is one of the most interesting and likable Victoria Haps you could find for a variety of reasons.

On that last point, Haplochromis thereuterion, is a slender, sword-like silver and black cichlid. A common name for this fish is the "Silver Katana" since it is shaped and colored a bit like a Japanese Katana sword.

Males have black or smokey paired fins, a silver to green sheen, a large egg spot and, when courting, a red tail. Females are nicely silver with a dark stripe running down the lateral line with a thinner, parallel line just below the top of the fish. Males get up to abotu 3-3.5 inches and females stay about an inch smaller. 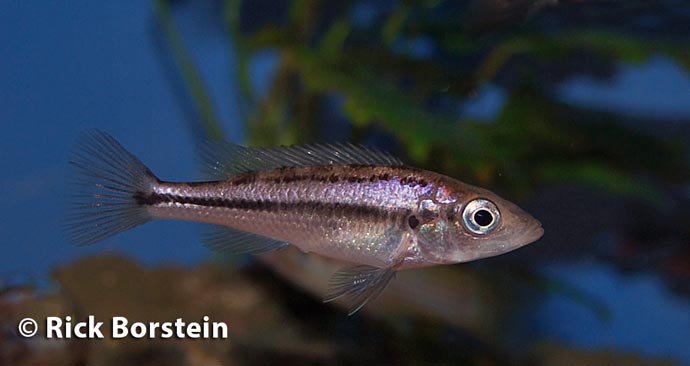 Haplochromis thereuterion  is found among rocky outcroppings in the Mwanza Gulf in Lake Victoria.

Haplochromis thereuterion is easy to keep. All it needs is clean, hard water that is 75-80F and a two foot or longer tank.

Initially, I raised up the babies in a 10G tank, but as soon as they were up to an inch, I moved the group into a 40B. This tank had a sand substrate and was filtered by 6-inch Swiss Tropicals Poret foam filter. My automatic water changing system turned over about 40% of the water weekly. I maintained the tank at 77F. Tankmates for the cichlids included about eight wild swords and mollies which were completely ignored by the Katanas.

In August, I observed the first female holding. My son Sam stripped a small female of just six fry. Later, I observed other females with distended buchal cavities after spawning. I let these females hold the eggs for 12 days holding and then stripped them of 16 and 20 fry respectively at the heads and tails stage. I placed the "belly whompers" in a two-gallon acrylic tank to which I added 90% clean water and a small sponge filter. A week later, the fry are free swimming and ready to eat live baby brine shrimp. I should note that the fry are quite thin and small, but they grow remarkably quickly if you feed them a couple of times a day. I fed live or frozen baby brine shrimp the first ten days and gradually weened them onto Cyclops-eeze and then flake food.

Interestingly, I got a batch of swordtail fry (Wild Guentheri-Helleri from Golden Stream, Belize, if you have to know) at the same time. So, I decided to raise the baby cichlid and swords together in a 10G tank. This works amazingly well. The swordtail babies take to flake food very quickly and I feel that cichlids adapt to flake food faster when there is another fish to "teach" them.

You are not going to find Haplochromis thereuterion at a pet store. It is relatively new in the hobby, but it is just now starting to show up on the internet. I suspect that unsexed juveniles would go for $6-8 per fish.