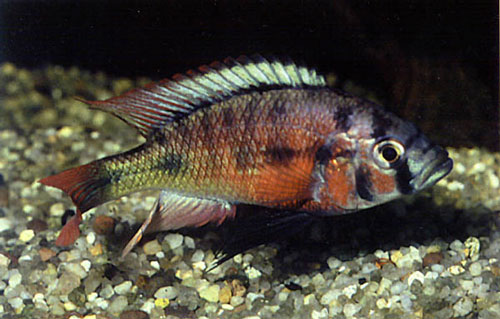 It just seems apt that that as I write this in December 2000 that I review a fish called the "Christmas Fulu". How it got its' name is a mystery to me. The Christmas part, I understand, when in breeding color, as pictured, this fish has both red and green coloration.

You can guess the habitat of this fish by just knowing it's a Rift Lake Cichlid. It likes hard alkaline water and a temperature of about 80 degrees F. They are relatively hardy and can stand extreme conditions. They love to dig, so choose a gravel size appropriate for a small fish.

The males are aggressive and I wouldn't recommend anything less than a 40 gallon tank. If you put multiple males in a tank, you are asking for trouble. Of course, a larger tank would accomodate more than one male. Also, use as many females as you can get, 6 or 8 females would be great. The male will divide his aggression over all the females. Of course, plenty of caves are in order.

As with most African Cichlids, the Christmas Fulu is not a problem child. Proper temperature, pH, hardness and weekly water changes of about 25% make this fish extremely happy.

Xystichromis phytophagus is not a finicky eater. In the wild, a large part of their diet consists of vegetable matter, so regular feeding of a vegetable flake is necessary. Any over the counter spirulina or algae type flake or pellet is readily accepted. They will eat almost anything given them, but offer a large variety of foods such as earthworms, brine shrimp, pellets and/or flake foods.

The Christmas Fulu might just be the Convict Cichlid of Africa. The male will dig a pit in the sand (make sure you have appropriately-sized gravel) and lure any ripe females into his pit. Once there, the male will flash the female and coax her into laying her eggs.

At retail, fry should be under $10. Young adults will probably fetch closer to twenty. As the norm, it's easier to buy several fry, raise them up and sell the extra males. If you buy 8 to 10 fry, the law of averages suggests you will get 50% male 50% female. If you can afford more, buy a dozen, then you are sure to get both sexes.

The Christmas Fulu is not a rare fish but not one you see everyday in your local pet store. Ask the store owner about them, he might be able to pick some up for you from one of the local breeders.