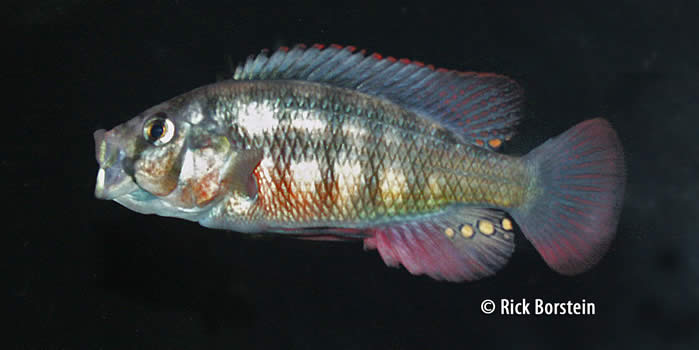 Above The male Paralabidochromis sauvagei male proves that fish yawn, too! Photo by Rick Borstein. 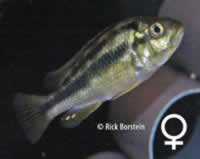 Paralabidochromis sauvagei is an attractive Victorian cichlid. This fish was originally imported under the name Paralabidochromis sp. "Rock Kribensis". The common name is not an entirely inappropriate description. Like many Victorians, it is a rock-dwelling fish. In fact, until recently, any of these small Victorians were grouped together and called "Rock Cichlids". Further, the red color of the male somewhat resembles the red/magenta color of the West African cichlid Pelvicachromis pulcher.

I am not sure when this fish was first imported to the US, but I believe it has been here since at least 1995.

Rock Kribs are not very aggressive.

Paralabidochromis sauvagei is found near rocky habitats between 5M and 25M in the lake.

The water in Lake Victora is hard. Water tempertatures average between 76-79F.

Paralabidochromis sauvagei is an easy cichlid to keep and breed. Regular partial water changes are appreciated. I performed 40–50% weekly water changes. This fish is one of the more mild-mannered Victorians. I successfully kept mine with various mbuna and Tanganyikans with no problems.

I don't know what Paralabidochromis sauvagei eat in the wild. In my tank, they greedily consumed cichlid flake, spirulina flake, frozen mysis shrimp, and Spectrum pellets.

I obtained a pair of Rock Kribs from fellow GCCA member Mike Garibaldi during one of our regular "fish swaps" on a Saturday afternoon. The conversation went something like this the quote below.

Rick: Are they easy to breed?

Mike: If you don't have fry from these fish inside of six weeks, you don't deserve to be in the hobby!

Rick: Wow! Are they good holders?

Mike: To a fault!

Mike bagged up the fish and took them home and dropped them into my 125-gallon mixed mbuna tank. A week later, the female was holding. Yes, it was that easy. I presume they bred on one of the many flat clay quarry tiles I had in the tank.

Brood size is dependent on the size of the female. Small females will have 8 to 12 fry. Once they reach adulthood, spawns of 35 to 40 fry is common. My son Sam spawned this fish a few weeks ago and counted 37 fry.

As noted above, females are outstanding holders. I let my female hold for 13 to 15 days and then stripped her. The fry were nearly fully developed at this point. Within another 4 days, the egg sack was gone completely. I fed the fry freshly hatched baby brine shrimp. They fry grow quickly and can be transitioned to flake food at 3 weeks.

My Paralabidochromis sauvagei bred about every six weeks. Feed the female well and watch for her belly to swell up. The female's golden hue will become a bit more pronounced, the male will show interest and breeding will ensue shortly.

You won't often find this fish in pet stores, but when you do it isn't expensive. Expect to pay about $7 to $10 for two-inch juvenile

Paralabidochromis sauvagei is available on several wholesalers lists and is common in the hobby. Ask your local shop to order some in for you.