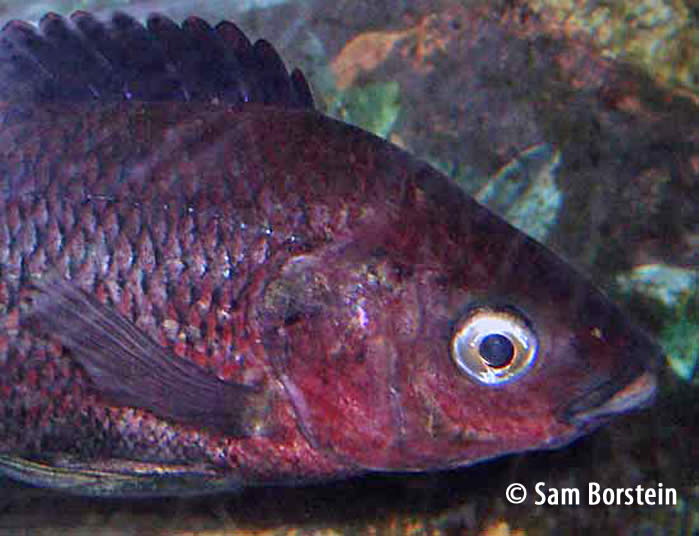 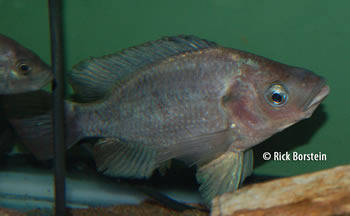 Oreochromis esculentus is not the prettiest fish, but it is a Victoria basin cichlid that needs our help. This mouthbrooding tilapia, first described by Graham in 1928, was once thought to be extinct in the wild. The downfall of this fish, like so many other Lake Victorian species was overfishing and the introduction of the Nile perch— Lates niloticus. Over the last twenty years, the population of Oreochromis esculentus in Lake Victoria has decreased by 80%, and was put on IUCN Red List as a critically endangered species.

Oreochromis esculentus gets big… males get up to about 14 inches; Females up to 12 inches. They reach sexual maturity at 3.5", so you can breed them at a reasonable size for the average aquarist. Males are larger than females, and are a lot more colorful when breeding. Males have an overall pink-red hue when happy and a dark blue/black dorsal. Females, when breeding, are tinged pink.

Note! Tilapia are amazing fish. They will eat anything, and will breed under difficult circumstances. This fish can live in very low oxygenated waters, thrive in widely ranging of pH, and will survive in temperatures from 40 degrees to 110 degrees Fahrenheit. Tilapia that are introduced into non-native waters cause great damage to the native fish, so never release them or keep them where an accidental release is possible.

The common name for this fish is the Singidia Tilapia

Oreochromis esculentus is native to Lake Victoria and its satellite lakes Nabugabo, Kyoga and a few small rivers flowing through the region.

This fish is easy to keep. Like many Tilapia species, it is difficult to kill. In April, I put eight in my pond, and the water was only 54 degrees. I didn't lose a single fish, although I did eventually add a heater to the pond after a particularly cold night here in Chicago.

Although many Oreochromis species can be aggressive towards each other, I found this fish to be very shy. They hid all day, and only came out to eat. I decided that I'd try dither fish, so I chose another Victorian, Pundamilia nyereri. This made the Oreochromis esculentus feel much more comfortable, and they began coming out more, but compared to other Tilapians, they were hermits.

These fish are large, so proper aquarium maintenance is needed. They can pollute a tank quickly, so make sure you have an efficient filter and do water changes regularly.

Because of their lack of aggression, I successfully housed eight 6-8" Oreochromis esculentus in a 75-gallon tank, with a breeding group of six, Pundamilia nyereri, doing 50% weekly water changes.

In the wild, Oreochromis esculentus eats plankton from midwater and detritus from the muddy bottom. In the aquarium, this fish will eat anything. I fed mine tons of different foods. The ones I liked best were Dianichi Veggie Deluxe, New Life Spectrum, and Tetra Cichlid Sticks. The later two help put weight on the fish, as many Oreochromis species burn a lot of energy in captivity.

For a Tilapia, this fish was challenging to spawn. They were very shy, and uncomfortable at first, and took a long time to settle down. Until I put the Pundamilia nyereri in with them, They clustered together, doing nothing.

Another issue I had with these fish was getting the females into breeding condition. These fish can eat and eat, but getting enough protein and fatty foods into the females for egg production was difficult. I upped feeding of the Tetra Cichlid Sticks., and this greatly helped.

The fish breed in a typical Oreochromis style. The male displays, female lays, male fertilizes, and the female pick up the eggs. These fish look nice while spawning. Males color up immensely, sporting burgundy colored body, and black fins.

The females only held for about 14-16 days, and had 300-350 small fry. These fry were first fed baby brine shrimp, and in three days, tripled in size, and began eating flake food. These baby fish grow very rapidly, and are very easy to raise.

I did notice a higher than expected amount of deformities in the young. I observed many that had spinal deformities and facial deformities. I only had about three fry that had these deformities per spawn, but that still was odd for me. My guess is that these fish are getting inbred, because the lack of new blood into the aquarium hobby. Remember to cull any deformed fry you may have, and make sure they don't wind up in the hobby.

In a word, this fish is not very available. We recently distributed three hundred fry to the GCCA's Growout Contest. Participants in this program will receive notice in the ACA's CARES program.

This fish is hard to find, and is definitely a specialist fish which doesn't interest many hobbyists. I've rarely seen it for sale anywhere. Help this species that is in need, and dedicate it some room in your fishroom.