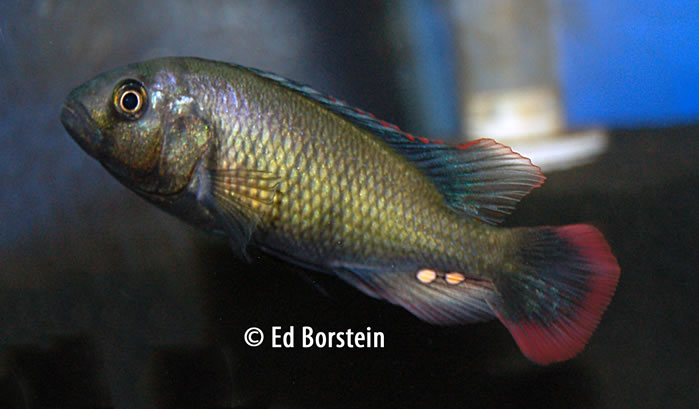 Photo of Male above by Ed Borstein. Photo of female, below by Rick Borstein. 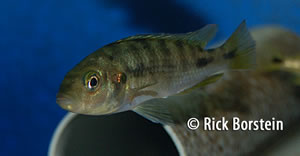 Neochromis greenwoodi "Mwanza Velvet" is a mouthbrooding cichlid from the Mwanza Gulf region of Lake Victoria, Africa. Synonyms for this fish are Haplochromis mbipi and Xystichromis sp. "copper black".

Neochromis greenwoodi "Mwanza Velvet"i is a very dark fish. In the aquarium, males, especially when showing off to females, are nearly jet black with a bold, red-edged caudal fin. Unfortunately, flash photography always seems to catch the transflectant underlying copper color of the scales.

Females, like many Victoria furu, are not that exciting to look at; they have an overall tan-grey body colore with some vertical stripes on the upper flanks.

Both the male and female are relatively high-bodied compared to other furu. A very large male Mbipia mbipi might get up to about 4-1/2 inches. Females will stay smaller at about 3 to 3-1/2 inches.

There are a few different location varieties in the hobby, but my quick internet analysis indicates that the Mwanza Gulf variety are likely the most common.

According to Fishbase, this fish "Inhabits various stony and rocky habitats, including stone-sand mixed substrates. It is generally more abundant at gently sloping shores with small and medium sized rock boulders."

Mbipia mbipi won't be much of a problem to hobbyists who have kept other types of Victorian cichlids. They generally ignore non-Victoria cichlids, but you can expect aggression within the group, especially between males as they approach breeding age. Provide ample rockwork and hiding places for sub-dominant individuals. Like other Victorian cichlids, 76-80F neutral to hard water is appreciated. I did weekly 40% water changes.

Fishbase says Neochromis greenwoodi "Mwanza Velvet" " . . .feeds on a variety of food items such as diatoms, filamentous epilithic algae, detritus, insect larvae and Bryozoa". Thus, this fish is omnivorous. I fed a variety of foods such as Dainichi Veggie Deluxe, HBH Graze, Aquarian Tropical Flakes, and the occasional treat of bloodworms.

A visit to Dave's Rare Fish is inspiring for the breadth of the selection and the many unusual fish. While in town, I was able to spend a day snorkeling the San Marcos River with Dave Hansen and Greg Steeves. There we saw lots of aquatic life including, of course, Texas cichlids..

Greg Steeves and Dave Hansen (along with Anton Lamboj) are coauthors of Cichlids of Africa: Volume 1 - Haplochromines which is an excellent reference book I recommend to anyone interested in Victorian cichlids.

Indeed, the fry I obtained from Dave's Rare Fish were offspring bred by Greg Steeves, the author of the book! Talk about cichlid provenance . . . later on we heard from Greg about the original incorrect ID as Mbipia mbipi.

Once home, I placed the small fish in a 15-gallon tank for grow out. A few months later, the fish were approaching 1.5 inches and needed a bigger tank. I moved the Neochromis greenwoodi "Mwanza Velvet" to a 45-gallon tank where they were housed with eight Exochromis anagenys. After a total of eleven months, the fish were approaching maturity and getting aggressive. I started losing fish to aggression. Only a single, large male and the largest female remained.

Luckily, the remaining pair spawned. The male showed no signs of letting up on the female, so I removed her after eight days and stripped her of twenty-two fry at the heads and tails stage.

At 23 days post-spawn, the fry were free swimming and were able to take freshly hatched baby brine shrimp. At six weeks after free-swimming, the fry are slightly over one-half inch long and growing fast.

Neochromis greenwoodi "Mwanza Velvet" is not a pet shop species. If found, I would expect adults to be in the $20-25 range.

Neochromis greenwoodi "Mwanza Velvet" is a not a popular fish in the trade, being exclusively a fish that dedicated hobbyists seek out.