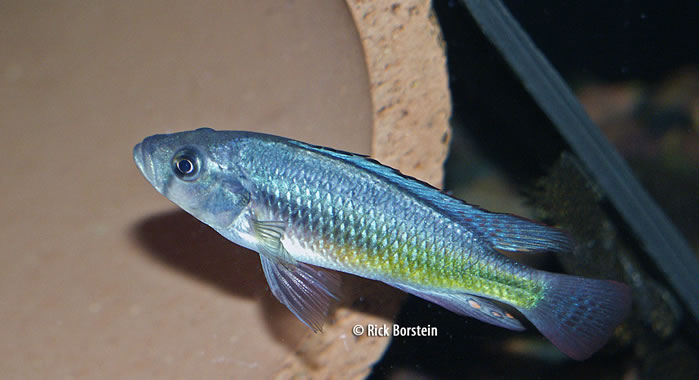 Lipochromis sp. "Matumbi Hunter" (aka Haplochromis matumbi) is an interestingly shaped, elongated Victorian cichlid. Males exhibit a greenish hue to the flanks with hints of blue and prominent egg spots. Females, as is the case with most Victorians, are drab in color. Reports on the web indicate that this fish was collected from the Southern Mwanza Gulf in the lake.

Of note to aquarists, This fish is considered endangered in the wild.

The "hunter" moniker is relevant given the feeding habits of this fish. This fish is a paedophage (preys on the fry and eggs of other fish). The elongated shaped and large mouth allow this fish to chase down smaller fish. Watching this fish in your tank, you can witness the incredible acceleration of this fish.

Males of this species get up to about 3.5 to 4 inches. Females are only slightly smaller.

Little is known about the habitat of this fish. I suspect that it is found near rocky areas.

Lipochromis sp. "Matumbi Hunter" is easy to keep. Simply provide neutral to hard water and temperatures of 76-80F. This fish will hold its own against more aggressive tankmates. I have seen three-inch males successfully defend a spawning site against fish twice the size. I kept my Matumbis with some very aggressive fish; Pseudotropheus fainzilberi, Tyranochromis nigriventer and Labeotropheus trewavase.

Lipochromis sp. "Matumbi Hunter" is easy to feed. I fed a variety of dry and prepared foods such as flake, pellets, etc.

I obtained six fry from one of GCCA's mini-auctions. I didn't know much about them at the time, but the "hunter" sounded interesting. I think I paid $9 for the bag.

I placed the fish in a series of grow out tanks and eventually moved them to an overpopulated 55-gallon tank. Like many Victorians, they are precocious breeders. I first saw a female holding about six months after purchasing the fish. I eventually moved the breeders to a 125 gallon cichlid community tank.

Lipochromis sp. "Matumbi Hunter" breeds in typical mouthbrooder fashion, generally after a water change. The dominant male will vigorously drive away any other fish in the tank. It is amazing to see a single little 3-inch fish on one side of a 125 gallon tank and twenty other fish cowering on the other side! Once the spawning site is secure, the male will dance and shake to beckon a ripe female to the site. This fish has attitude!

In my experience, females are not very good holders. Females generally lost their spawns after 2-3 days. For this reason, I recommend catching out the female within 24 hours of spawning and stripping the fish. I used a commercial egg tumbler and added Acriflavine Plus as a fungicidal. I experienced no losses.

Spawns average 8 to 14 eggs. Young females may only hold 4 or 5 eggs. The eggs are also quite small, about half the size of Pseudotropheus species. They young fry are free swimming in 14 to 16 days and are gray-green in color. I recommend newly hatched brine shrimp as a first food.

This isn't a fish that I've seen at pet stores. Although it has an interesting shape, it's probably not colorful enough for the retail trade. The small spawn size would make this fish relatively expensive to produce. I expect that prices for adults would be in the $15 to $20 range.

Lipochromis sp. "Matumbi Hunter" is available on some wholesaler's lists on the web and within various cichlid clubs. If you like Victorian cichlids, this fish is worth tracking down.