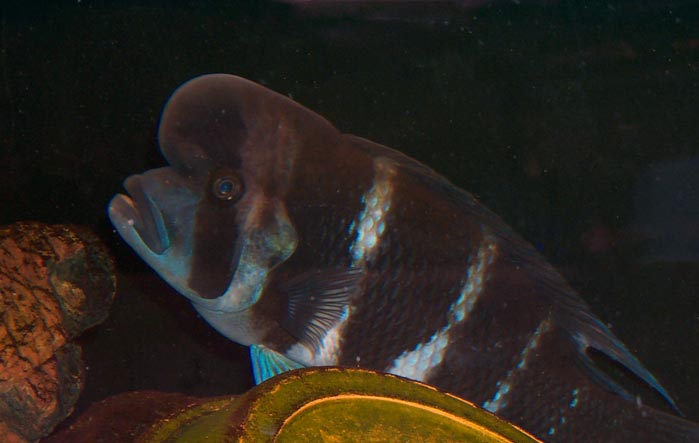 NOTE: Since we originally published this article, Frontosa have been broken into several species. We will have an update in the coming months.

Cyphotilapia frontosa is one of the largest of the cichlids collected from the Rift Lakes, Lake Tanganyika, specifically. Large yes, but not as huge as some of the New World Cichlids. Males can attain a size up to or over 12 inches, females somewhat smaller. C. frontosas’ most distinguishable trait is it’s large hump located on its’ frontal lobe. C. frontosa sometimes called the Tanganyikan Humphead was one of the first cichlids brought into this country in the early seventies. There are several populations of Cyphotilapia frontosa available today.

The most common are the "Six-stripe" and the "Seven-stripe". Others include the "Cape Chaitika", "Mpimbwe Blue", "Samazi Blue", "Zambian" and the "Zaire Blue".  It takes an expert to tell some of these varieties apart. Of course, if it’s a variety with a different striping pattern, it’s a little easier. To most casual observers, they are a large humpheaded white and black fish with varying degreees of blue replacing some of the white.

Cyphotilapia frontosa is present in different populations (color variations) in all parts of Lake Tanganyika. They are found in both sandy and rocky parts of the lake. They are deep water inhabitants, ranging between 40 and 350 feet, and when collected have to be brought to the surface in stages so they don’t get the bends or end up with swim bladder problems.

Cyphotilapia frontosa likes hard alkaline water around 76-82 degrees, although they will tolerate slightly higher or lower temperatures. Some salt may be added but they do fine without. As stated, Cyphotilapia frontosa likes a sandy to rocky habitat and caves and/or large flower pots should be included. Minimum tank size is a 29 or 30 gallon tank for one fish. They do best when kept in groups. For a group of 5 or 6 adults a 75 gallon tank would be overcrowded. I recommend no less then a 125 gallon tank, the large, the better.

C. frontosa fry are extremely large and can eat anything. Start them out with newly hatched brine shrimp or if you prefer a quality flake food. Within two weeks, the fry can eat adult brine shrimp. Adults will readily eat flake food, pellet food, goldfish, adult brine shrimp, bloodworms, earthworms and/or night crawlers. They are a great way to dispose of your culls. In the wild they eat other fish and larger invertebrates.

Cyphotilapia frontosa are harem spawners. Wild fish do best when one male is in a tank with 4-6 females. You can have more than one male but he will be harassed. Some people will put 2 or 3 males with 10 to 12 females in a homemade 400+ gallon tank. A large breeding colony can produce a hundred fry a month. Two things worth pointing out is that C. frontosa have huge eggs and that the incubation period for the eggs in excess of thirty days.

If you plan on obtaining C. frontosa fry know what you are purchasing, the price can vary greatly. If not, buy from a reputable dealer. When buying "wild caught" be aware that the price can be high even for the common color varieties. Part of the extra expense is due to the additional time and money spent harvesting them from the lake.