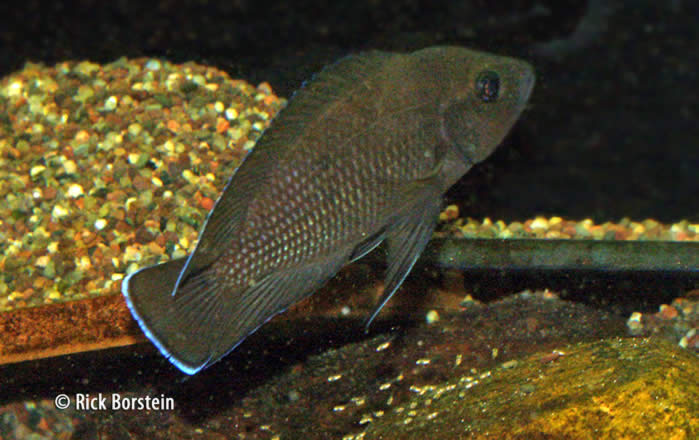 Above Variabilochromis moorii female and fry. Photo and by Rick Borstein.

Both male and female are very dark, nearly black, and sport an electric blue edge to the tail fin. There are also blue highlights on the pectoral and dorsal fins. Synonyms for this fish are Lamprologus moorii or Neolamprologus moorii. In fact, the Variabilochromis nomenclature is farily new.

According the Ad Konigs excellent book Tanganyikan Cichlids in their Natural Habitat, Stiassny's revision of the Lamprologus group recommended that this fish be moved to the Variabilochromis species for several reasons

Several locality variants of this fish are known, but the only difference in appearance occurs in fry and juveniles. All varieties, as adults, are uniformly dark.

The Congo variety sports dark fry. The other varieties, which hail from Kalembie, Cape Mpimbwe and various shores in Zambia, sport yellow to orange colored juveniles. The variety from Kipili, Tanzania sport the brightest yellow-orange fry.

Why would a dark fish have yellow fry?
A conversation with Chuck Rambo (December 2003) provided an interesting answer. Chuck observed Variabilochromis moorii "parking" young with Neolamprologus mustax in the lake. The yellow Variabilochromis fry look nearly indentical to the mustax. The result is free baby sitting allowing the Variabilochromis to move on to another spawn more quickly.

In the lake, Variabilochromis moorii is found in the shallow, rocky habitat. Numerous caves and rock surfaces are found in this area. Maximum depth in this area is 10M.

Variabilochromis moorii is not difficult to keep. You can easily house a pair in a 20-gallon tank. Temperatures of around 78 to 80F work well. Like all Tanganyikans, provide hard water and do regular partial water changes. I changed 30-50% per week. My water is standard Chicago tap water, about 7.2pH and 300 ppm hardness, or dH 8.2.

I obtained a pair from fellow GCCA member Sam Miller and immediately housed them in a 20 gallon high tank.

After two months, I became frustrated that this fish had not spawned. I moved the pair to a 55-gallon tank containing Lepidiolamprologus hecquii and my luck improved. The hecquii spawned and about a week later so did the moorii.

Since this fish is a secretive cave spawner, provide lots of caves and rockwork. My fish spawned in a 4-inch terracotta cave.

Variabilochromis moorii is fairly easy to sex. I believe the females are larger. In my case, my female was quite a bit larger than the male. You can also discern the sexes by watching parental behavior. The small male guards the outskirts of the territory. The always-alert female stays near the eggs/fry at all times.

Variabilochromis moorii forms solid pair bonds unlike the bulk of Lamprologines which are harem spawners. Once you have a pair, you can expect good production and compatibility for a long time.

Spawns for this fish can be quite large, up to 500! I ended up with about 100 fry in all. The fry are tiny, so you'll need to start them out on freshly hatched baby brine shrimp. The fry grow pretty fast, especially for a Lamprologine. They were about 1/2" long at six weeks of age.

Variabilochromis moorii can be purchased for about $16-23 per adult fish. Juveniles are much less expensive; in the $10-14 range per fish.

Variabilochromis moorii is not often found at pet stores, but is available on many wholesale lists. Ask your local pet store to order some in for you.