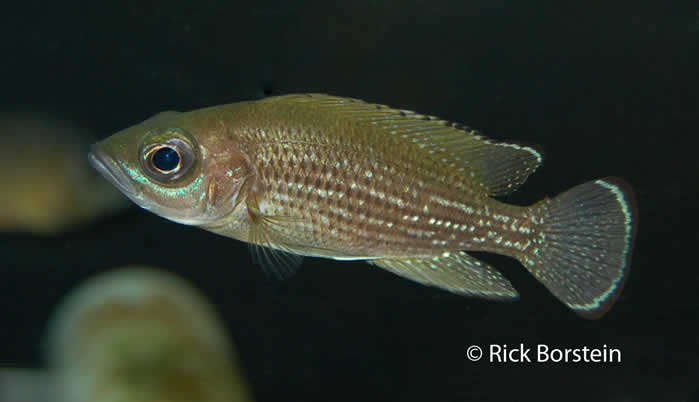 Neolamprologus toae is a substrate spawning cichlid native to Lake Tanganyika which was first typed by Poll in 1949.

Males get up to about four inches and females stay slightly smaller. This is a relatively slow moving cichlid, but it can put on a surprising burst of speed when needed.

The original collecting point was near Toa on the Conglose coast, hence the scientific name.

It is very difficult to sex these fish. Females may have a slightly rounder appearance when they are full of eggs and may also be slightly smaller.

Paleolamprologus toae has a large distribution and may be found over most of the northern half of Lake Tanganyika, often closely associated with Neolamprologus tretocephalus.

This fish will hide quite a bit, especially of there are bright lights on the aquarium. I kept my group of four adults in a 125G tank along with a few large Buffalohead cichlids.

Regular partial water changes are always a good idea. I maintained a tank temperature of 78F.

Set up your tank with lots of rocks, caves and hiding places.

Neolamprologus toae is a carnivorous cichlid in the wild, moving into the shallows to feed primarily on shrimp at dawn and at dusk. I fed a variety of foods such as Dainichi Color FX, Spectrum and various flakes with the occasional treat of some frozen brine shrimp or blood worms..

I obtained Paleolamprologus toae in two batches a year apart. I purchased four individuals at the Ohio Cichlid Association Convention and a year later picked up a few more from Dave's Rare Fish on a visit to San Antonio. All the fish were 1 to 1.5" juveniles, so I spent about two years growing up the fish. At two years, the fish were all a least three inches long with a male topping out at 3.5 inches.

As I merged groups of fish together, the eight fish I had eventually killed themselves down a large, dominant male and two females.

Neolamprologus toae are not very active fish, so it takes careful observation to see any spawning activity. Although I did not witness a spawning, I did notice that the largest female had stayed hidden for a few days. At this point, I began feeding baby brine shrimp, hoping that the fry were hidden away safely by the female.

Soon, I observed the female with about 30 large .25" fry which she had moved to a pit in the center of tank. The male patrolled the outskirts of the female and fry, keeping other tank inhabitants at bay.

The female is a vigorous protector of her fry and it is a delight to see in the aquarium. In the wild, this fish will guard their offspring for up to twelve weeks. I observed great parental care for almost that period of time before I moved the parents out to another GCCA member.

Neolamprologus toae can sometimes be found at cichlid specialty shops. When available, it is expensive with juveniles in the $10-12 range. Wild adults are about $50-70 each. Paleolamprologus toae is only rarely seen in the hobby, but there always seems to be dedicated Tanganyikan hobbyist with them.