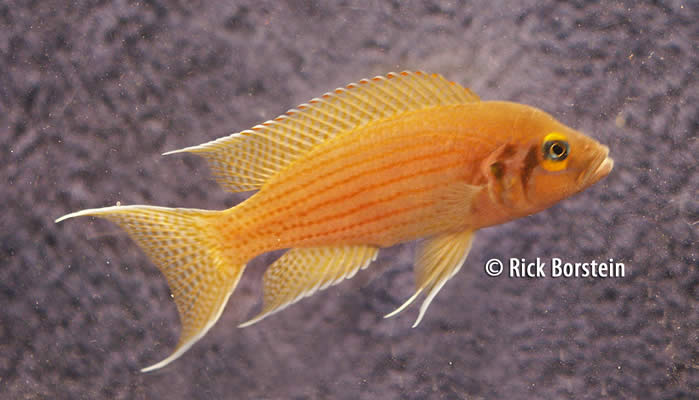 Neolamprologus olivaceous is a substrate spawning fish from Lake Tanganyika. It was first typed by Brichard in 1989.

It can be very difficult to tell various members of the Brichardi complex apart. Neolamprologus olivaceous has two curved bars (chevrons, according to Konings) on the gill cover.

Konings (1993) has proposed that Neolamprologus olivaceous is synonymous with N. pulcher. Indeed, the currently popular N. sp. "daffodil" may be a geographical variant of N. pulcher since it shares very similar gill markings.

This family of fish is currently undergoing reclassification. Since the fish is known in the hobby aas Neolamprologus olivaceous, I'm going to stay with this nomenclature for this article.

Members of the Brichardi complex are found at nearly every rocky shoreline in the lake, so this is a successful group of fish. Most of these fish are found 5M or deeper in the lake. Water conditions in Lake Tanganyika are pH of 8.2, 76 to 78F.

Neolamprologus olivaceous is easy to keep, but I recommend a species tank. From my experience, it does not get along with similarly sized Tanganyikan fish. I have heard of two examples of extreme aggression between N. caudopunctatus and Neolamprologus olivaceous. I have succesfully raised Brichardi-types with various mbuna, but for best results in breeding, you will need to move them to their own tank.

Like all cichlids, regular partial water changes are critical to fish health. Some text claim that Tanganyikans are sensitive to water changes, but that has never been my experience. I performed weekly, 50% water changes with no problems.

I obtained six 1.25 inch fish from former GCCA President Monica Boester. I placed the fish into a 20 gallon long aquarium which had a sponge filter and a Whisper 1 power filter. Uncharacteristically for me, I kept them in the same tank until they reached adulthood about nine months later.

Neolamprologus olivaceous is a secretive cave spawner. The will lay their eggs on the ceiling or side of rock or cave. My fish bred in an inverted clay flowerpot which had a 2 inch hole drilled in one side. A good substitute would be terracotta breeding caves.

Neolamprologus olivaceous is a very rewarding fish to spawn and are great parents. Like other members of the Brichardi complex, they form long-lasting pair ponds. Juveniles and adults will tolerate fry in the tank and may even help take part in raising the babies.

The fry are tiny! I immediately began feeding newly hatched baby brine shrimp which both fry and adults really enjoy. Spawns are in the 40 to 75 range in my experience. Older pairs have larger spawns.

The fry grow steadlily, but slowly. At three months of age, most of my fry are at the 1 to 1.25 inches long and are of saleable size.

Neolamprologus olivaceous is found occasionally at shops that specialize in cichlids. It is currently a popular fish in the hobby and is found on many wholesale prices lists on the web. You will likely find this fish at a GCCA auction or swap meet.