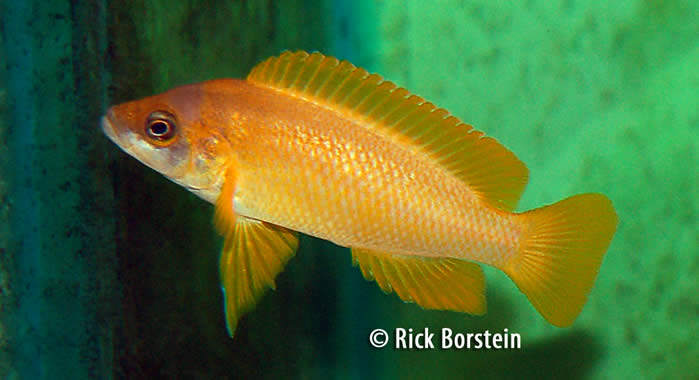 A number of location variants are known including Gombe, Chituta, Mbete, Sumbu and Mzwema. From the pictures I've perused on Cichlid Forum, the chief differentiator is color which ranges from yellow-tan to pinkish-yellow.

My fish were of the Sumbu variant and were overall quite yellow (more N. lelupi-like, if you will). Color and appearance is not a diagnostic of location as this fish can exhibit a variety of appearances depending on the tank substrate and surroundings. I am a big fan of pretty much any yellow fish, so I was excited to get this variety.

Neolamprologus mustax is intolerant of of others of its species and of conspecifics. You definitely would not want to keep it with N. leleupi, or perhaps amy other Lamprologine.

Males are generally larger, more highly colored and a bit deeper in the body than females. Males approach four inches in length and females stay a bit smaller, topping out at three inches.

Neolamprologus mustax is found in the shallow, rocky habitat of Lake Tanganyika at depths of 15-80 feet. It often hovers vertically among rock faces, a behavior that is observable in the aquarium as well. Water temperature in Lake Tanganyika is about 76-80F and the water is very hard with a high pH.

Neolamprologus mustax requires some thought and planning, particularly if the hobbyist wishes to breed them. Since this fish is intolerant of its kind, provide lots of rockwork and hiding places. I recommend a light colored sand substrate if you wish to observe the brightest colors in this fish. Over dark gravel, this fish turns dark and dusky.

In the wild, Neolamprologus mustax feeds on a variety of invertebrates and is a carnivore. In the aquarium, the fish accept a variety of prepared foods. I fed Spectrum, HBH Graze, HBH Cichlid Flakes, HBH Soft and Moist and the occasional treat of blood worms or frozen brine shrimp.

Neolamprologus mustax is more difficult to breed than the more popular (and more common) Neolamprologus leleupi. My first attempt at breeding these fish a few years ago resulted in disaster— I couldn't even keep the fish alive.

My second try was more successful. I obtained eight F1 juveniles of the Sumbu variant from Dave's Rare Fish in San Antonio, TX during a business trip to the city. Proprietor Dave Schumacher is an ACA member and one of the nicest guys you will meet in the hobby.

I placed the individuals in a 90G tank containing a light sand substrate. The tank was maintained at 78F and filtration was via a Tidepool II wet/dry filter.

Tankmates included a trio of Aulonocara koningsi, four Mylochromis lateristriga and several Astraloheros sp. "Red Siebal". Although unconventional, this set-up worked well. However, despite many targets for the fish, I observed a lot of mustax on mustax chasing and aggression.

Over the next several months, I lost a a mustax every couple of months. Some jumped out and others mysteriously disappeared. I was not optimistic about breeding this fish, but my son Sam commented that he thought the Neolamprologus mustax had in fact been behaving normally and were " . . . killing each other down to pair." The remaining two fish got on well.

At this point, the male was about 2-1/2 inches and the female was about two inches. A few months prior, I had placed a small, two-inch terracotta breeding cave in the tank. Neolamprologus mustax is a secretive substrate spawner and the fish will generally lay the eggs vertically on a cave sidewall where you may not see them.

In fact, I didn't even know the fish had spawned until Sam alerted me that there were fry wriggling in the spawning pot. I quickly chased the female from the pot and harvested about twenty almost free-swimming fry.

I moved the fry to a two-gallon container to which I added a small sponge filter and Hydor 7.5 watt heater. The fry are tiny, but just able to pound down a live baby brine shrimp or two. Tanganyikan fry can be sensitive to water quality, so make sure you carefully siphon out any uneaten food to prevent a drop in pH.

I replaced the breeding cave in the tank and next time I hope to observe the fish with their brood.