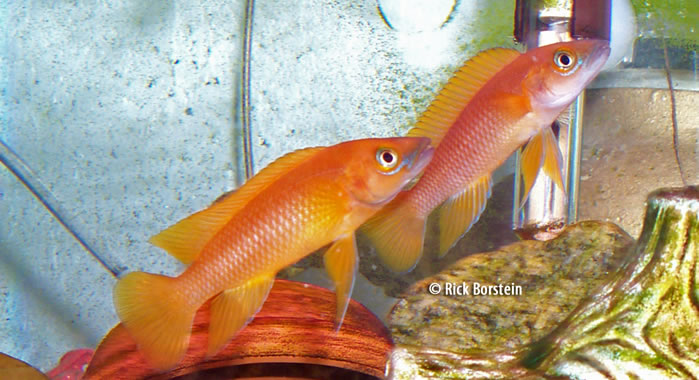 Neolamprologus leleupi juveniles. This shot is of one of the orange variants of the species.  Photo by Rick Borstein.

These fish were first typed by Poll in 1956 and imported a few years later. Rosario LaCorte was one of the early breeders of this fish in the US. When speaking to the GCCA a couple of years ago, he recounted how easy he found them to breed. Meanwhile, others had problems getting them to reproduce and he made quite a bundle selling the fish.

I first bred Neolamprologus leleupi in 1991 in a 55 gallon community tank with little problem. In 1999, I bought six young of the orange variety feeling quite sure that I would have them spawning in no time. Success was long in coming for me the second time around . . . more on that in the breeding section below!

The most common form of this fish is yellow, but many varieties are occasionally available including the blue lip leleupi and the orange variety shown above. There are even gray, tan and near-black varieties, but they are rarely seen in the hobby.

I believe the most desirable fish are the bright yellow variety from which the original common name "Lemon Cichlid" obviously originated. You'll often see excellent examples of bright yellow leleupis at GCCA's Cichlid Classic, our annual show and convention. A really good leleupi should exhibit a uniform yellow color with the least amount of black on the lip.

You may observe quite a variation in color depending on both the substrate/background of the tank and diet. Keep Neolamprologus leleupi over white sand and feed them a large amount of color enhancing food, and you'll have bright yellow fish. Keep them over black gravel and the fish will appear quite muddy.

Fortunately, the fish will color correct if you move them from tank to tank, but it takes a month or two. I have heard anecdotally that raising the fry over a light substrate is critical to raising a bright yellow show quality fish in the future.

Neolamprologus leleupi is found from 5 to 30M deep around rocks and rubble in Lake Tanganyika. Lake Tanganyika has very hard and alkaline water— pH range of 7.5 to 8.0 and a dH range of 12.0 to 15.0.

Neolamprologus leleupi is not difficult to care for assuming you can provide suitable water quality. If you have soft water, you may find this fish difficult to keep and breed. My water is neutral in pH, but quite hard, and the fish did fine at 78 to 80F.

There is a common myth in the cichlid hobby that Tanganyikan fish do not respond well to water changes. This is blatantly untrue! They are sensitive to rapid changes in temperature and chemistry, however. I change 50% of the water for all the Tanganyikans I keep and they do very well. Make sure that the water you are replacing is chemically consistent and within 2 degrees F of the tank temperature and everything will be copacetic!

In the wild, Neolamprologus leleupi feed on zoobenthic organisms; fish eggs, insects, copepods, etc. From a hobbyist perspective, however, they don't present many problems. I fed mine a variety of flake foods, frozen brine shrimp, Tetra Cichlid Sticks, etc.

Neolamprologus leleupi have surprisingly large mouths for so small a fish. They can swallow some pretty big pellets, for example. In addition, they have some impressive fangs when viewed from the front.

Neolamprologus leleupi is not sexually dimorphic. It is difficult to tell the sexes of young fish. Males may grow up to twice the size of the female. Size is the only indicator that I have found reliable to sex these fish. Unfortunately, the fish need to be about a year and half old before these profound size differences become apparent.

I believe the best way to breed this fish is to place several juvenile fish in a community tank and allow them to grow to an age of eighteen months. You will want to keep this fish with relatively non-aggressive fish. I have kept them with most Malawian mbuna with success. Provide a few caves and watch to see if a pair forms a bond. Look for a large fish (the male) and a small fish (the female) that like to hang out together.

Prepare a 20 gallon tank with a fine gravel or sand substrate and provide lots of rocky caves. I used about ten piece of slate and some broken flower pots. Provide bright light over the tank to promote algae growth. I also added a power filter and a sponge filter.

Transfer the probable pair to the newly prepared breeding tank and you should soon see signs of massive excavation work within a week. Let the fish go two weeks without a water change and then do a 50% water change to trigger the fish to breed.

Neolamprologus leleupi is a secretive cave spawner. You will rarely see the eggs. If you don't see the female for several days, she may be sitting on a spawn. If you do find the eggs, don't be surprised that they are nearly pure white! I thought they were fungused or infertile, but sure enough they hatched after about four days. I wonder how many other aquarists have thrown out perfectly good spawns from Neolamprologus leleupi because of this!

Once the female disappears for a while, I add small amounts of fry food to the tank. I use a small pinch of Cyclops-Eeze and Golden Pearls, a brine shrimp replacement available from Brine Shrimp Direct. Even the adults seem to enjoy this food. Live baby brine shrimp is an even better option. I feel that having some fry-appropriate food in the water encourages the parents to raise the fry.

Once the female reappears, you may see the pair alternating to care for the spawn. At this time, you may be able to observe the very small fry. I fed the above Cyclops-Eeze/Golden Pearls mixture two to three times a day and it was really neat to see the fry jumping after the food. Typical spawns are from 40 to 100 fry. The fry double in size the first two weeks, but are generally slow growers after that.

One of the satisfying things about Neolamprologus leleupi is that these fish are excellent parents. I kept the fry in with the parents until they get quite big and even had multiple spawns peacefully coexist. Be warned, however, as other aquarists have told me that the parents will attack and kill their kiddies once another spawn is on the way. To be safe, you probably should remove either the parents or fry.

One mistake I made is assuming that they would breed in a community tank with other cichlids. I waited in vain for months before moving these fish to breeding tank. I believe a sanitary tank not only isn't necessary, but may hinder the pair from raising the fry. I feel that a tank with algae and some detritus is actually helpful in providing a first food for the fry.

Neolamprologus leleupi is often available at GCCA auctions or events. At our last Swap Meet, there were at least 20 bags of these fish available.