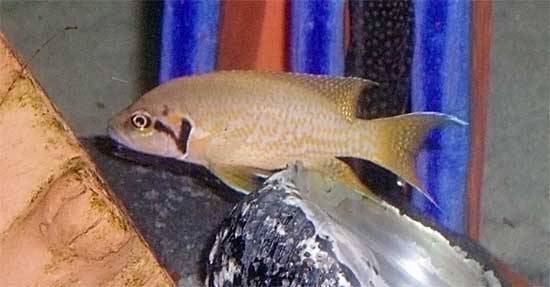 A recent introduction, Neolamprologus helianthus is a substrate-spawning Tanganyikan cichlid first typed by Büscher in 1997. This fish is part of the Brichardi complex, all of which demonstrate outstanding parental care.

Neolamprologus helianthus is an aggressive cichlid, especially when guarding fry, so beware. Only keep it with tankmates that can "take it."

I kept a pair of 1.5 to 2" Neolamprologus helianthus is in a 90-gallon tank along with eight Vieja fenestratus which averaged seven inches long. They regularly beat on the larger fish which were easily 20 times their mass. Amazing!

I believe Neolamprologus helianthus has sharp teeth at the front edge of their mouth. They would hang close to rocks and then rocket out to engage the sides of the larger fish. It was clear that the attacks were painful and the larger fish soon learned to stay out of the way.

Male Neolamprologus helianthus obtain lengths of about 2.5 to 3" while the females stay a bit smaller at a bit over 2". Other than size, I have not found a good way to distinguish the sexes of this fish.

In Lake Tanganyika, Neolamprologus helianthus is found at depths of 2 to 7 meters in close assocation with rocky cover.

Neolamprologus helianthus is easy to care for, but mind intraspecific and interspecific aggression!

My water is pH 7.4, 300 ppm hardness. Water of neutral pH and medium to high hardness will suffice. I did regular partial water changes of 50% weekly.

I haven't been able to find out what this species eats in the wild, but my guess is that it picks food from the rocky substrate and free-floating plankton. In the aquarium, they take a variety of prepared foods. I fed Tetra Cichlid Flakes, HBH Graze, New Life Spectrum and baby brine shrimp.

I obtained four juvenile Neolamprologus helianthus from fellow GCCA member Mike Garibaldi. Mike had warned me about the aggressive nature of this fish, particular to its own kind! He also assured me that this fish "could handle itself, but that only a pair would survive." Prophetic words!

I took Mike at his word and placed the four fish in a 90-gallon tank containing a sand substrate. Robert Borghese, a New Jersey-based cichlid hobbyist and friend, mentioned that this fish is a pile breeder. Accordingly, I stacked up a small mound containing a shell, a terracotta cave and a couple of pieces of rock to form a pile.

Within a few weeks, a pair formed and excluded the other Neolamprologus helianthus from their territory in the pile. Within a month or two, they had eliminated the competition (I never found the bodies) and firmly established themselves in the tank.

As soon as I saw the smaller fish— the female— spend almost all her time in the pile, I was confident she was on a spawn. All fish in the Brichardi complex are secretive, cave or shell spawners. Often, the fry do not emerge until they are quite large, even 1/2" long. Thus, it is important to offer the newborn fry a food source while still in the cave or shell.

Three weeks went by and I still didn't see the fry. One day, I accidentally moved the shells while netting out some other fish. Fortunately, my son Sam noticed some tiny fry on the bottom of the tank. I siphoned out nine tiny Neolamprologus helianthus babies and raised the separately with great success. Again, I fed newly hatched baby brine shrimp.

For future spawns, I was careful to be more patient. The fish have spawned at least twice and I think they have another spawn in the shell. Like other members of the Brichardi complex, multiple generations of the fry co-exist and are guarded together which is a delight to watch. It is really great to see 1/2" babies and 1/4" babies darting around the rock pile!

Unlike some Tanganyikan substrate spawners, clutch size is small— perhaps 10-20 eggs, but the fish breed more or less continuously. The fry grow fairly slowly and take about four months to get to 3/4" long.

Neolamprologus helianthus is rarely available at pet stores. Expect to pay about $14-18 for juveniles domestic fish and $28-30 for wild fish.

Neolamprologus helianthus is is occasionally available at GCCA auctions and swap meets. There are numerous wholesalers on the internet who list the fish, so if you want them you can get them. If you're looking for them, place a free Wanted ad on GCCA's Cichlid Classified system.