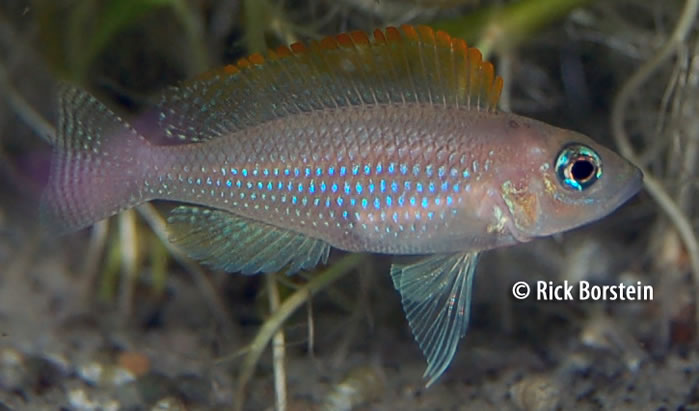 Neolamprologus caudopunctatus is a tiny shell-dwelling cichlid native to Lake Tanganyika. This colorful, little, yet feisty Lamprologine was first described by Poll in 1978 with a type locality of Cape Kabeyeye.

Neolamprologus caudopunctatus is a pretty fish. It earns its nickname Red Fin Caudopunctatus from the bright orange-red dorsal fin. This fish has some green to blue color on its scales and depending on mood may show three vertical bars. The fish grow to a little over three inches. They are monomorophic and the best way to sex them is by size. Females may have a rounder appearance when ripe with eggs. Males appear a bit more elongate.

Neolamprologus caudopunctatus is a cave spawner, but in captivity have been grouped with shelldwellers because they readily breed in shells.

Neolamprologus caudopunctatus is found in the intermediate habitat of Lake Tanganyika and only along the Zambian coastline. Water in Lake Tanganyika is very hard with a pH of about 8.0 and a dH range of 15.0 - 25.0.

Neolamprologus caudopunctatus is easy to keep. I kept and bred six individuals in a twenty-gallon tank. Caudos are intolerant of each other, but once a pair has formed, they generally have a strong bond.

Provide a sand substrate or very fine gravel, rocks, caves and shells. Planted tanks are fine—and even recommended—as the plants break up sight lines and diminish aggression. Even better, Neolamprologus caudopunctatus unlike many cichlids, will leave the plants alone.

One report said this fish is found around Valisinaria beds in the wild and breeds nearby.

Neolamprologus caudopunctatus is easy to feed, but needs a diet high in protein. In the wild, they dine on plankton and anything they can pick out of the sand. In aquaria, they will eat any meaty flake or pellet. They especially love baby brine shrimp.

I obtained six juvenile "Caudopunks" from fellow GCCA member Ray Slover at one of GCCA's swap meets. Years ago, when I was a relative cichlid novice, I had not had a lot of success in keeping them. Aggression had led to losses in small tanks (5-10 gallon), but I was ready to try again with some new strategies to manage them.

With fingers crosses, I brought the fish home and placed them in a heavily planted twenty-gallon long. A few Blue-tail Goodeids were used as dithers. The Caudos hung near their shells and caves and excavated quite a bit of sand. The fish settled in nicely and in about three months I saw spawning activity.

Breeding is not difficult to detect. Digging intensifies and the spawn site will be covered partially or even completely with sand.  Shells may be buried and the openings to pots may be covered. The parents will uncover the spawn site when the fry have hatched.

The fish are not picky about spawning sites. I bred mine in both shells and terra cotta caves. Since the parents keep the fry stashed away where you cannot see them, changes in behavior are the only way to know there has been a spawn.

The babies are very small and feeding baby brine shrimp is a necessity. The best way to ensure viable fry is to feed baby brine shrimp as a regular part of the diet of the adults. The adults relish the treat and this way you ensure a food source for the fry who often do not emerge from the shells for ten to twenty days post hatch. Even after, they stay very close to the shell until the parents kick them out to spawn again.

Fry grow quickly—at least for a Tanganyikan—and are cared for well by the parents.

Update We were able to observe the eggs for the first time recently. They are white in color, but still fertile!

Expect to pay $9 to $15 for juveniles at the pet shop. I have seen Neolamprologus caudopunctatus in various pet stores over the years, but your best bet is to place an ad on GCCA's Classifieds or peruse the internet.