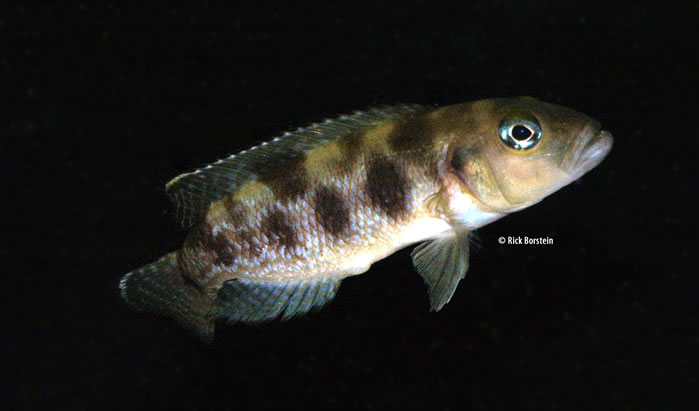 Lepidiolamprologus hecquii is one of the largest shell-dwelling cichlid from Lake Tanganyika. It is found in Tanzania, but Konings reports that it has fairly wide distribution in the lake.

First typed by Boulenger in 1899, males get up to about 3 inches in length. Females are slightly smaller reaching a maximum length of about 2.5 to 2.75 inches. Some synonyms for this fish are Lamprologus hecquii and Neolamprologus hecquii, but the Lepidiolamprologus nomenclature has been suggested by Ad Konings and is now accepted generally. 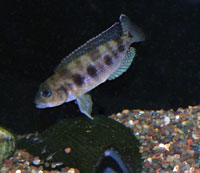 Lepidiolamprologus hecquii, even at their best, are just not that attractive. When in breeding dress, both males and females get subtle silver-blue spangles on the flanks. Generally, however, the tan and dark brown mottled appearance (as above) is what you'll get. Fortunately, Lepidiolamprologus hecquii exhibits interesting parenting behavior that makes this fish fun to keep. One aspect of this fish that is unique is the threat behavior. Lepidiolamprologus hecquii , when defending a territory or fry, assumes a nose down position. Generally, most cichlids will flare the gills or curl the body. This behavior is offered not only to both intra and interspecies. It's unusual, that's all I'll say!

In Lake Tanganyika, Lepidiolamprologus hecquii is found near shell deposits of the Neothauma snail, although in the aquarium they will accept other accommodations. Water in Lake Tanganyika is very hard with a pH of about 8.0 and a dH range of 15.0 - 25.0. Temperature in the lake is near constant at 76F.

Lepidiolamprologus hecquii is easy to keep. While not terribly aggressive, it will hold its own with fairly aggressive tank mates. I have successfully kept them with various Pseudotropheus which were quite aggressive.

I have not found this fish to be sensitive to water changes. I changed water 50% weekly with no problems.

Lepidiolamprologus hecquii will readily accept a variety of foods. I fed Tetra Cichlid Flakes, Tetra Cichlid Sticks, Plankton Flakes, frozen daphnia, etc. Lepidiolamprologus hecquii has quite a large mouth for a fish of this size. Although most reports say that it is an opportunistic plankton feeder, I believe it may also prey on small fry of other shell dwelling species.

I obtained about a dozen juveniles from fellow GCCA member Sam Miller and placed them in a 55-gallon tank along with several other young cichlids to grow out. The fish did fine, maturing to adulthood, but wouldn't breed.

After the hecquii reached adulthood, I removed the competing fish from the tank. I noticed some Lepidiolamprologus hecquii pairing off in the tank, but still no fry. I removed four individuals and placed them in a twenty gallon tank. I also moved a pair of Neolamprologus moorii down into the 55-gallon tank. I noticed digging activity in both tanks. And, to my delight in both the 20 and 55, broody pairs excavated caves underneath flat pieces of slate. These fish are secretive spawners, so it doubtful you will ever know for sure where or when they lay the eggs.

Normally, I do 50% water changes every week, but due to business travel, I had missed a week (possibly two, but I am not going to readily admit that!). The next weekend, I did my regular 50% water change. At the same time, a major low pressure cell moved into the Chicago area.

The next day, I had Lepidiolamprologus hecquii pairs breeding in both tanks! Tiny fry appeared a couple of days later. I immediately began feeding newly hatched baby brine shrimp. I estimate the brood size at about 50 to 75. You can begin feeding crushed flake food at about two weeks.

Lepidiolamprologus hecquii are excellent parents rigourously protecting the fry from enemies and shepherding the babies around the tank. My fish moved the fry from pit to pit and eventually "bedded them down" in a small teracotta cave for the night. The fascinating parental behavior is one of the best reasons to try this fish!

Some additional tips for breeding this fish

Lepidiolamprologus hecquii isn't a common fish at pet shops. It's just not that pretty! Fortunately, it is available on several wholesalers lists, so ask your local store to order some for you. Expect to pay about $10-12 at retail for young adult or juvenile fish. Lepidiolamprologus hecquii is occasionally available at GCCA's auctions and swap meets. I have seen location variants on some wholesalers lists, but have not seen that any of these variants look significantly different from the fish I maintained.

Report May 2003 by Rick Borstein