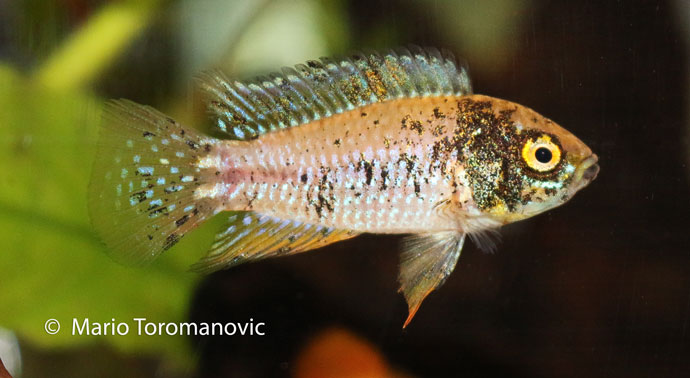 Apistogrammoides pucallpaensis is often called the T-bar cichlid in older aquarium literature. The common name comes from the dark lateral line forming a perpendicular with a vertical line at the caudal peduncle.

Etimology: Apisto = irregular or unreliable + gramma = line, means the lateral line which is often reduced. I suspect that the lateral line is formed weakly or irregularly + oides = similar, shall refer to the close relationship. pucallpaensis = after the locality, a stream in the surroundings of the city of Pucaullpa in Peru.

Apistogrammoides pucallpaensis is fround near the the town of Pucallpa in Peru. It is also found along the Rio Ucayali and the Rio Amazonas to Leticia, Colombia. Habitats vary from small streams, to stagnant water, and the fish are usually found under cover of submersed plants and dead leaves.

Prior to receiving new, wild caught specimens of Apistogrammoides pucallpaensis, I prepared my tanks to mimic water from their natural habitat. Unlike many Apistogramma species, Apistogrammoides pucallpaensis doesn’t need “extremely soft” water. Most of the water in their natural habitat is from Soft to Neutral range pH 7.0. With this in mind, I mixed prepared a mix of 50% regular tap water and 50% RO (reverse osmosis) water for the tank. Water parameters were pH 6.8, TDS between 70 to 150 ppm (parts per million), which is consider soft and I maintained temperature in the tank at around 79°F.

Getting wild caught fish to eat is always a concern. I was very lucky that my wild caught Apistogrammoides pucallpaensis were already transitioned and readily accepted prepared food, such as flakes and pellets. They loved frozen food such as daphnia and brine shrimp. I also enjoyed watching them purse live black worms and small baby brine shrimp in the tank.

I obtained two wild caught pairs of Apistogrammoides pucallpaensis from Ted Judy at TedsFishroom.com. Ted had imported many rare and hard to find fish from Peru at that time, and I was so happy to obtain new Apistogramma species. I placed both pairs in ten gallon heavily planted tank which contained numerous caves and hiding spaces. At first, I was not impressed with the fish. The fish exhibited no color, and all four of them were hid most of the time. After about two months, I noticed that my female had turned yellow and black. A male colored up as well and began chasing away the two other fish. At this point, I moved newly formed pair to five gallon tank with similar furnishings and water parameters.

About two weeks later, the pair of Apistogrammoides pucallpaensis spawned. The female selected a secluded spot under a piece of driftwood and deposited 60-70 eggs. The female guarded the eggs for three days, and then once they hatched, moved the wigglers to nearby cave. Four days hence, I observed a batch of tiny fry near the entrance to the cave, closely guarded by the female. Although the male stayed at least two inches from the brood, he was still protective, chasing away Endler’s livebearers which I employ as dither fish.

I began feeding the fry with New Life Spectrum Small Fry food which is a finely powdered food for very small fry. I also introduced newly hatched baby brine shrimp and a few days later completely transitioned the fry to baby brine. The parents kept the fry in a tight group for about four weeks before they allowed the fry to venture out on their own. I was very impressed with parental care exhibited by both parents.

Apistogrammoides pucallpaensis is not a striking fish, but the parental care of this dwarf cichlid means this fish has a charm on its own. I don’t think you will find these fish in pet shops, and you will not even find it easily on the internet. If you do find it, expect to pay $25 to $30 for pairs or $7 to $10 for juveniles. I would recommend this fish for more experienced breeders, especially those with experience working with Apistos.