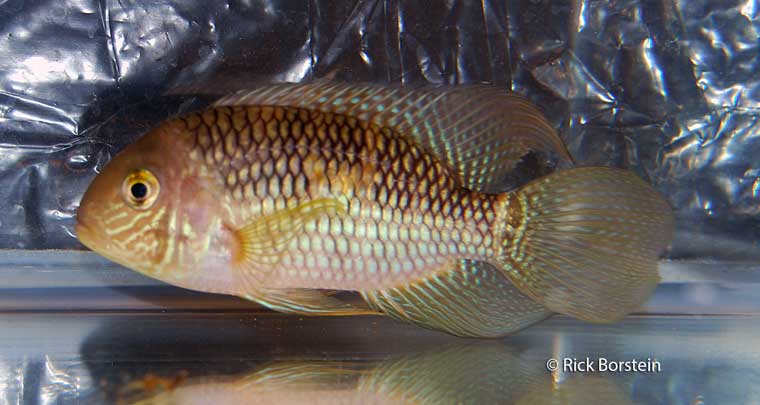 Above Aequidens metae Male at the 2012 Cichlid Classic. Photo by Rick Borstein.

Aequidens metae is a substrate-spawning first typed by Eigenmann in 1922. The species name "metae" is descriptive of the Meta River (Columbia) which is part of the Orinoco River basin. Common names for this fish are the Yellow Acara or the Twin Spot Flag Cichlid.

As the common name suggests, this fish has two large spots . . . one is found about mid-flank and the other is at the base of the tale. The picture of the male above doesn't really show that, but the fish was stressed at the time the picture was taken. The mid-flank spot may be surrounded by a band of yellow. The underlying base color is yellowish-green.

Aequidens metae is a found in netural to soft water in wider rivers and drainages.

Aequidens metae is easy to care for and house. As previously mentioned, this fish has a mild temperament and should only be kept with similarly disposed cohabitants.

Aequidens metae is easy to feed. I couldn't find any data on wild fish stomach content analysis, but I would guess that it is omnivorous. I was able to feed a variety of flake and pellet foods.

I purchased a group of eight one-inch juvenile fish after I spoke to the North Jersey Aquarium Society in February, 2010. The fish were bred by Frank Nell, an accomplished cichlid breeder in the club. Unfortunately, Frank dropped off the fish for auction and left and I didn't get a chance to speak to him about them. Still, I'd never heard of this species or seen it in Chicago, so I tucked them into my suitcase and flew home to Chicago.

I placed the young fish in a 40B for grow out. They grew steadily with 50% weekly water changes. My water is typical for Chicago; about 7.4 pH and moderately hard. I didn't see any breeding activity, so needing to obtain tank space, I moved them to a 300 gallon pond for the Summer of 2011. This large pond had tons of plants and livebearers zoomed overhead. I didn't see the Aequidens metae often, but when I did they seemed to be doing fine.

My son Sam visited home halfway through the Summer and with his sharp eyes he thought he saw signs of a female guarding a spot near some rocks. A few days later, we saw a small cloud of fry. Given that the pond is two-feet deep, I made Sam turkey-baste out some babies which I brought inside for growout. The fry grew fairly quickly on baby brine shrimp and I BAP'd them in the Fall.

At the end of the Summer, I distributed the adults at the GCCA Swap Meet and the adult male above was one of my original fish. It is now owned by Mario Toromanovic.

Some internet accounts say that this is a hard to breed fish. I think it probably needs soft water and temperature in the mid-80s. It probably didn't hurt that the pond got pretty hot and that the fish had lots of live food.

Aequidens metae is not a fish you are likely to find at a pet shop, although plenty of cichlid fans seem to be keeping it. If you could find it, I would expect 1.5 inch fish to go for $9-12.