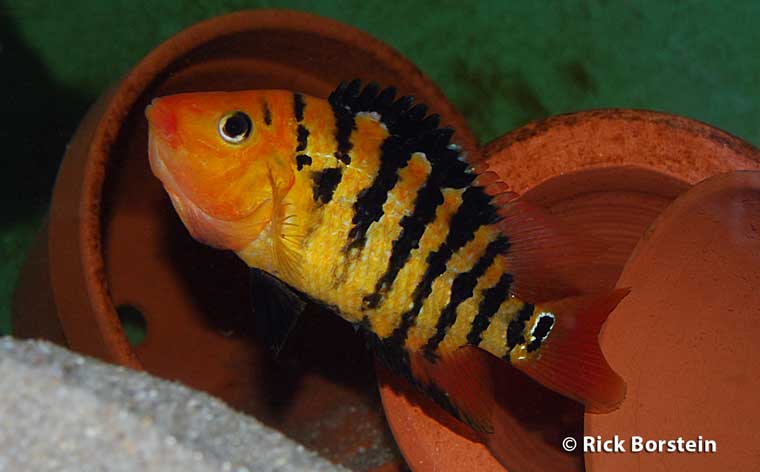 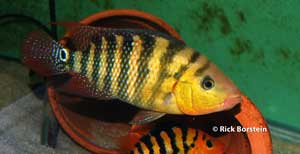 Cichlasoma festae is a large substrate-spawning cichlid native to Rio Esmeraldas in Ecuador and the Rio Tumbes in Peru. A common name for this fish is the Red Terror. It is a fitting name as the breeding color of this fish is bright orangey-red and this fish gets big and very aggressive. Females top out at about a foot and males get up to twenty inches!

Male festae are still good looking, but not spectacularly so. Males also have prominent stripes over a gold base, but the flanks are overlayed with blue-white speckles. The face is reddish.

Among fans of large Central and South American cichlids in the GCCA, this is a bit of a status fish. Since GCCA's inception in 1971, only seven members have turned in Cichlasoma festae in our BAP program.

In the long term, I expect scientists will move Cichlasoma festae out of the Cichlasoma genus. I think there is a good chance this fish will be moved into the Tomocichla genus.

Cichlasoma festae is a riverine cichlid. It is generally found along the banks of rivers hiding under brush and overhangs.

Cichlasoma festae isn't difficult to care for, at least in terms of tank temperature and water conditions. Tank temperatures of 70 to 80 are OK and my fish did fine in hard, Chicago water. The challenging aspect of keeping this fish is the severe aggression once this fish gets sexually mature. For a large fish, it isn't all that messy, at least in comparison with Oscars and Red Devils. Large tanks are obligatory. I kept eight young adults in a 90-gallon tank successfully. One additional challenge in keeping this fish is the variable growth among members of the same spawn. The most dominant fish in the group will quickly outpace his siblings in growth. It isn't unusual that the largest fish will be 3-5 times the size of the smallest. This doesn't bode well for the smaller fish.

I purchased ten Cichlasoma festae from "Chef Jimmy", a frequent vendor at GCCA Swap Meets and a big fan of large cichlids. My son Sam and I visited the Chef at his home in the southwest suburbs of Chicago where we saw his spectacular pair of festae in a 180G tank. The pair had spawned a few weeks prior and were still in breeding color as there were a few fry in the tank. The male was close to 14" and the 9-inch female was brightly colored and aggressive.

I had to have some of the fry! I purchased ten young, one-inch fry for $6 each and took them home. I placed them in a 40 gallon breeder tank for growout and grow quickly they did!  The largest male soon outpaced his siblings in growth and killed off the males closest in size to him. At three inches, it was clear who the dominant male and female were. The fish dug only moderately in the substrate.

After about 13 months in the 40B, I moved the fish to a 90G tank with a sand substrate. This tank was amply filtered by a wet/dry system. With the additional space, the fish put on a surge of growth and within about four months the largest male was about eight inches long and his mate of choice was a bit over five inches. Shortly after, I started to see the largest female gradually change into the glowing orange color described above.

At this point, given what I knew about this fish, I expected to see severe aggression as the fish "killed down" to a pair. Surprisingly, the fish spawned without doing any damage to their six tankmates!

I believe a spawning trigger was a low pressure cell moving into the area coupled with a water change of cooler water.

The female laid about 150 eggs inside the lip of a discus cone which I had laid on its side in the tank. The female guarded the fry fairly well, but would leave the eggs to eat at feeding time. I have heard reports of full-grown festae laying up to 3000 eggs.

The eggs hatched in five days and four days after that the fry were free-swimming. I used a turkey baster to siphon out about half the wrigglers to raise separately. The largish fry were immediately able to take newly hatched baby brine shrimp and they grow quickly.

Unfortunately, the pair were unable to raise the fry which remained in the tank. I attribute this to inexperience and a lack of food for the fry.

Cichlasoma festae is occasionally available at pet stores, especially among shops that specialize in cichlids. Festae are pond raised in Florida. Two-inch juveniles, when available, are in the $10-15 range.

Report May 2012 by Rick Borstein